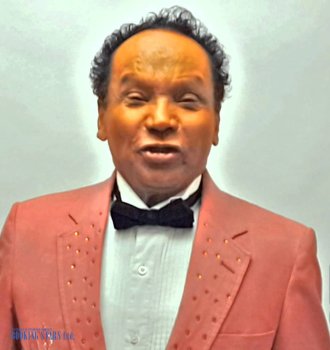 Pablo Villanueva Branda (pseudonym Melcochita) was born on 17 September 1936 in Lima. Little Pablo was growing up in the music environment. Thanks to an early start, he managed to become famous rather fast. Even though Pablo is already 81 years old, he is still young at heart and works in show business. Melchochita has a long discography. Many albums were recorded in New York studios. He appeared on many TV programs, performed in a few films, and attended radio shows.

The Melcochita pseudonym came to Pablo after the appearance on the TV show Trampolín a la Fama. The show host Augusto Ferrando said that Pablo “sweetened up” the program. In Peru, melcocho means sweet. Pablo always knew what to say or sing at any of the numerous shows he was invited to. He was even noted on the celebrity list as Sonero Nato, which stands for “The King of Improvisation.” Pablo has exceptional mimicking and gesturing skills. He can also use different voice tones. This makes him a wonderful comedian and an exceptional singer.

In 1950’s, together with his brothers, Pablo established his first music band Son Cubillas. Back then, he used the pseudonym Pacocha.

In 1960’s, when garage rock and rock-n-roll were conquering Lima, Pablo was recording just that music, which made him famous all over Peru. It was rather problematic to book Melcochita for any event as either a comedian or a singer. Event planners spent a substantial amount of time and effort trying to snag Melcohita’s performance. At that time, Pablo also worked with different bands, such as Los York and Traffic Sound.

In 1970, Melcochita recorded a song "La cosecha de mujeres nunca se acaba.” The single together with another song “La Reforma”, which appeared on the disc’s side B, became very popular. A little later, Pablo recorded the LP Acabo Con Lima Huyo Pa'New York with Karamanduka band.

In 1983, Melcochita became the first Peruvian celebrity to appear on the Late Night Show with David Letterman. It was a big honor.

As a sonero and salsero singer, Pablo performed with such artists as Johnny Pacheco, Willie Colón, Tito Puente, Celia Cruz, and others. He worked with different TV and radio shows on a regular basis. He also participated in such Peruvian programs as A Reir, Quirky, Laughter, Salsa, and Rechargados.

Just recently, Melcochita celebrated his 81st birthday. Even though he has been in show business for many decades, the singer stays almost as popular in Peru as he was in the 60’s and 70’s.