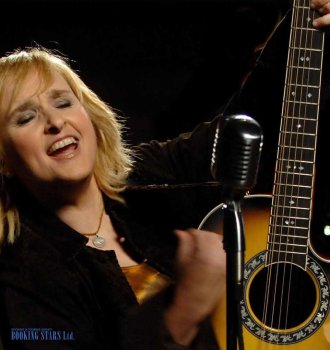 Melissa Etheridge was born on May 29, 1961, in Kansas. She is a singer, songwriter, and guitarist. Etheridge is mostly famous for such hits as “Like The Way I Do”, “No Souvenirs”, “I’m The Only One”, and “Just Stand Up”. She holds several awards, including two Grammies and an Oscar.

Melissa Etheridge is not just famous for her work as a singer and a songwriter; she also fights for the rights of sexual minorities. The key to her success is the pure truth of her lyrics, the melodic folk rock, and a husky voice.

In 1988, Melissa released her first album Melissa Etheridge. It reached the 22nd spot on Billboard 200 and 3rd spot on ARIA chart. The LP received several platinum certifications. When the album was released, the critics compared Etheridge to such celebrities as Bruce Springsteen and John Mellencamp. The same year she performed at the Grammy awards ceremony.

For a few years, fans and reporters were playing a guessing game about Melissa’s sexual orientation. Eventually, she decided to come out, calling her next album Yes I Am (1993). Within 1 year after the release of the LP, more than 6 million copies were sold in the USA only. Etheridge received a Grammy award for the Best Female Rock Vocal Performance. A single from that album “I’m the Only One” became her greatest hit. The song reached the 8th spot on Billboard Hot 100 and received international recognition.

In 1997 and 1998, Melissa gave birth to a son and a daughter. The sperm donor was David Crosby, a member of the legendary rock group The Byrds. In 2006, she gave birth to twins.

In 2007, Etheridge received an Oscar for a song to Albert Gore’s documentary about global warming. When she looked at the figurine, Etheridge joked that it will be the only naked man in her bedroom.
Melissa Etheridge released 14 studio albums, 27 music videos and 33 singles. She continues to work on her music career and performs live.