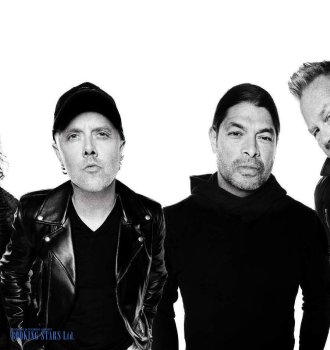 The heavy metal band Metallica was formed in California, in 1981. The current lineup includes James Hetfield, Kirk Hammett, Roberto Trujillo, and Lars Ulrich. The band holds numerous awards including nine Grammies and four Billboard Music Awards. Metallica is mostly famous for such hits as “Unforgiven”, “Nothing Else Matters”, and “Until It Sleeps”.

Lars Ulrich and James Hetfield met thanks to the ads, which they both placed in the newspaper The Recycler. They recorded their first demo album Hit The Lights with the guitarist Lloyd Grant, who was later replaced by Dave Mustaine.

In 1983, the band released their first studio album Kill ‘Em All. It helped Metallica become a role model for many rock groups in the industry, however, Metallica didn’t like keeping to the same style for too long. The band gave concerts in Europe with such heavy metal groups and Raven and Venom.

Even though the album Ride the Lightening (1984) was well received by the fans, especially the song “For Whom The Bell Tolls”, in 1986, the band released an iconic LP Master of Puppets. This was their first album recorded in the USA with Elektra Records. It collected a big variety of wild and elegiac songs.

The recording of the next album ….And Justice for All (1988) took a rather long time and plenty of effort. The most famous single from this LP was “One”. It reached the 40th spot on Billboard Hot 100 and 20th spot on UK Singles Chart.

In 1991, Metallic released a no-name album, which is known to the fans as The Black Album. That album included such timeless songs as “Nothing Else Matters”, The Unforgiven”, “Sad But True”, and “Enter Sandman”, which was a huge MTV hit. The LP helped the band take a quantum leap in their career. It went on various tours and received numerous rewards.

The next album Load immediately became a hit topping all the charts and receiving numerous platinum certifications. It sold 5 million copies in the USA only. When recording this LP the band members made a decision to slightly change their standard style and introduced alternative rock.

The band released 4 more albums, the latest one to date being Hardwired.. to Self Destruct (2016), all of which topped most of the popular world charts and became platinum in many countries. Metallica continues to work on new music and performs live.