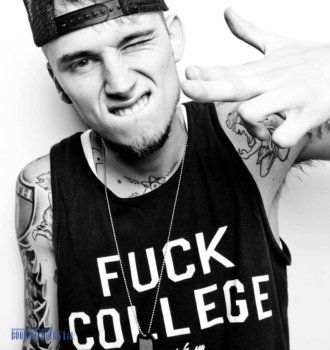 Machine Gun Kelly (real name Colson Baker) was born on 22 April 1990 in Houston, Texas. In 2005, he quit high school, started using drugs and recording music. Back then, Colson came up with his first demo album Stamp of Approval.

Soon Baker decided to devote his life to music and adopted a pseudonym Machine Gun Kelley (MGK) in honor of a famous gangster George Kelly. In 2006 and 2007, the artist released two mixtapes, Unstoppable and Stamp of Approval. He also started performing in clubs. The next two mixtapes, Certified and Homecoming, came out in 2008 and 2009 accordingly.

In 2010, MGK released another mixtape 100 Words and Running, in which his fans heard the phrase “Lace Up” for the first time. Later, it became a hit. In May, the rapper presented his official debut single "Alice in Wonderland". The song brought him an award at Underground Music Awards as "Best Midwest Artist". The music video for this song earned an Ohio Hip-Hop Award. At that time, many fans tried to book Machine Gun Kelly for their private events, but it was a tough task.

The same year, the rapper released another mixtape Lace Up: The Mixtape, which was recognized by XXL magazine and brought the artist several Ohio Hip Hop Awards. One more award was granted for the music video for the song "Cleveland", which was featured in the mixtape.

In 2011, Baker signed a contract with Bad Boy Record.

In March 2012, MGK released his debut EP Half Naked & Almost Famous. The album reached the 46th spot of Billboard 200 and climbed to the 9th and 10th position on Rap Albums and R&B/Hip-Hop Albums charts accordingly. The lead single "Wild Boy" barely made it to Billboard Hot 100 and settled on the 98th position. Later the song was rated platinum by RIAA.

In October 2012, the rapper presented his first official LP, Lace Up. The album debuted on the 4th spot of Billboard 200 but then plummeted to the 22nd position a week later. The LP reached the 2nd spot on Top R&B/Hip-Hop Albums Chart. The album was a hit in Canada, reaching the 14th position on Canadian Albums Chart.

Starting 2012, Baker began working on several TV series, where he usually played himself. However, sometimes he got other small roles. In 2014, Baker landed a small role in a romantic drama Beyond the Lights.

At the beginning of 2015, the rapper released a lead single from his upcoming album. The song "Till I Die" earned a gold status from RIAA. The album itself, which Baker called General Admission, appeared in October. Just as the first LP, this album reached the 4th spot on Billboard 200. It also topped Billboard Top R&B/Hip-Hop Albums chart. It was a hit in Canada and entered charts in seven countries.

In 2016, Baker spent a lot of time filming. He worked on four movies. In one of them, The Land, he was the co-executive producer.

MGK’s third studio album bloom came out in May 2017. The single "Bad Things", which was performed together with Camila Cabello, reached the 4th position on Billboard Hot 100 and entered the charts of 21 countries. The LP found itself on the 8th spot on Billboard 200 and the third spot on Top R&B/Hip-Hop Albums. A few months later, the album earned a gold status in the USA.

In 2018, Baker’s fans are expecting to see him in two more movies, Captive State and Bird Box.