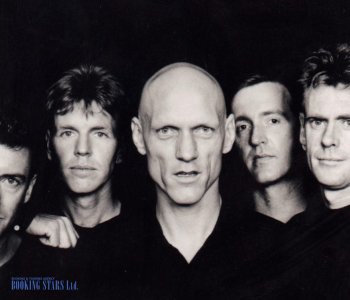 Midnight Oil was formed in 1971 in Sydney, Australia. Initially, it was called Farm. The first lineup featured guitar players, Jim Moginie and Martin Rotsey, drummer Rob Hirst, and a bass guitarist, Andrew James. The artists began their joint careers by performing covers on other musicians’ hits.

In 1975, Pete Garret joined the band. He used to play with Rock Island Line. The new member became the lead vocalist and the leader of the band. In the next year, the band toured the east coast of Australia, giving small concerts. At about the same time, the artists changed the name from Fame to Midnight Oil.

For a long time, the band couldn’t find a label that would agree to work with it. So in 1978, the artists decided to form their own. They called it Powderworks Records. Soon, the group released its first LP, Midnight Oil. Next year, the artists presented a new album, Head Injuries. It featured the band’s first big hit, “Cold Cold Change”, which earned gold status in Australia. A year later, Andrew James left Midnight Oil due to health issues. Peter Gifford took his place. With Gifford, the band released a new EP, Noises, which made it into many Australian charts. The album was produced by the ex-member of Supercharge, Leszek Karski, whom the band worked with before.

To record their next album, the artists invited a British producer, Glyn Jones, who used to work with The Who and Rolling Stones. The album was named, Place without a Postcard. It featured songs with social lyrics and powerful rock music. The combination brought the artists popularity. The LP included several hits, such as "Brave Faces" and "Armistice Day". At that time, many fans wanted to book Midnight Oil for private events.

Between 1984 and 1990, the artists released several more albums, such as Red Sails in the Sunset, Diesel and Dust, and Blue Sky Mining. All of them were commercially successful, bringing the band more popularity. During that period, the artists released one of their best hits “Beds Are Burning”. The song made its way into many European charts as well as Billboard Hot 100.

As the popularity of the band was growing so was the number of concerts it was giving. Musicians attended numerous events. After the release of Diesel and Dust, Gifford decided to leave. Many critics noted that the album was influenced by R.E.M. It became highly financially successful. Two singles from the LP, "King Of The Mountain" and "Forgotten Years" made it to the top-3 of the Modern Rock Tracks Chart.

In 1992, the band presented a concert album, Scream in Blue, which featured old hits recorded by Midnight Oil.

In 1993, the artists presented an album, Earth and Sun and Moon, which was recorded in the style of the 1960s. Fans gave the LP great reviews. However, artists didn’t like it for the soft and light sound.

In 1996, Midnight Oil recorded a new LP, Breathe. Two years later, they came up with Redneck Wonderland. Both albums earned gold statuses. After the release of the latter, the musicians decided to take a break from studio work. In the next four years, they recorded just one album, The Real Thing. The artists were too busy giving concerts.

In 2002, the musicians recorded a new LP, Capricornia, which featured a mix of electric and acoustic guitars. After the release, Garret left the group and came back briefly in 2005 for a charity concert to support victims of the Indian Ocean tsunami. Between 2002 and 2003, the band released several singles, including "Golden Age", "Mosquito March", "Too Much Sunshine", "Luritja Way”, and "No Man’s Land". Soon, the group declared disbanding.

Midnight Oil reunited in 2009 for several charity concerts and disappeared once more.

In 2016, the artists came back together once again and started touring the world. They are planning to release a new album in 2020.