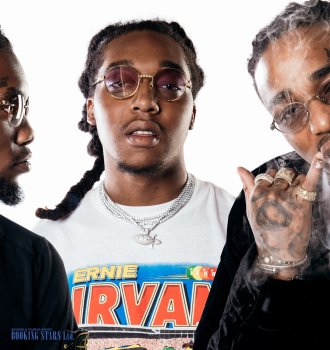 In August 2011, Migos presented the debut mixtape Juug Season. Their next mixtape No Label came out next summer.

In 2013, the band made a breakthrough by releasing a single "Versace". The song made it into Billboard Hot 100, reaching the 99th spot. It was enough to make the band famous. The Canadian rapper Drake created a remix of the song. It appeared on iHeartRadio Music Festival and brought Migos impressive popularity. The next mixtape Y.R.N. (Young Rich Niggas) came out in June. It received good reviews from many critics.

By the end of 2013, "Versace" could be seen in many “best single” ratings. Mixtape Y.R.N. made it to the 27th spot of Spin Magazine’s best album rating. The magazine also called the album the 6th best hip-hop album of the year. Migos started getting a variety of offers to play at private birthday parties.

In February 2014, the trio released the sequel of their second mixtape. It was named No Label-2. In the first week after the release, the album was downloaded 100,000 times and certified gold on DatPiff site. A month later, the band released another mixtape Y.R.N. 2. In June, their single "Fight Night" entered XXL’s top-25 rating of the best songs of 2014. A little later, the song reached the 69th spot on Billboard Hot 100.

Their next mixtape Rich Ni**a Timeline came out on 5 November. The Rolling Stones magazine rated it at the 7th position of the best rap album list in 2014.

In February 2015, the band presented their new single "One Time". Soon the music video came out. The song reached the 34th spot of Hot R&B/Hip-Hop Songs.

In July 2015, Migos released their debut studio album Yung Rich Nation (initially called Y.R.N.: The Album). It was recorded together with Young Thug and Chris Brown. The LP reached the 3rd spot of Billboard’s Top Rap Albums Charts. In September, the band switched labels and started working with Quality Control Music. They also released a new mixtape called Back to the Bando. It earned international recognition. In October, Migos and Rich the Kid released a joined mixtape Streets on Lock 4.

The next mixtape Young Rich Ni**as 2 came out in January 2016. In the fall, Migos released the first single called "Bad и Boujee", which was part of their upcoming album. Three days later, they recorded a music video. The single topped Billboard Hot 100.

The second LP, Culture, was released in January 2017. The LP immediately topped Billboard 200. It sold over 131,000 copies in the first week. The LP was nominated for a Grammy.

In May, Migos presented their new single "Too Hotty", the music video to which came out in August. The LP Альбом Quality Control: Control the Streets Vol. 1 came out in a few months.

In October 2015, Migos officially released the leading single "MotorSport" from their upcoming album Culture II, which they worked on together with Cardi B and Nicki Minaj. The second single "Stir Fry" came out in December.

The band has two BET awards and nominations and several BET Hip Hop Awards nominations. It was nominated for a Grammy award twice. The LP Culture II was released on 26 January 2018.