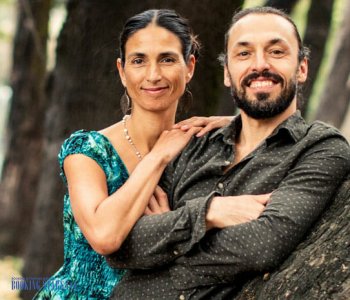 The music of Mirabai Ceiba draws the listener into a gossamer web of gently plucked strings, stately piano arpeggios, subtle vocal interplay and poetic lyricism. The sound is easy to love, but hard to categorize. It’s world music. It’s chamber music. It’s folkloric. It’s devotional. But it ultimately transcends any label you try to put on it—except for “beautiful.” In it, we hear the loving heart-play of two gifted musicians and singers—the husband-and-wife team of Markus Sieber and Angelika Baumbach. Together, they’ve created a series of acclaimed, exquisitely-realized studio albums and concert experiences that immerse listeners in a shimmering world of transcendent wonder.

Markus and Angelika come from different parts of the globe. He’s East German. She’s of Mexican and German heritage, born in Tucson, Arizona, and raised in a small village near Mexico City. They met at a street fair during Edinburgh’s Fringe Festival and quickly formed an alliance both romantic and musical. The name Mirabai Ceiba reflects the couple’s pan-global perspective. Mirabai (1490-1547) was a legendary Hindu devotional singer. The Ceiba is the sacred tree of Latin America.

Mirabai Ceiba’s debut album, Flores, was released on Spirit Voyage Records in 2004. It announced the arrival of an inspired new musical fusion drawn from far-flung influences. Markus’ forte is instruments of the plucked lute family—guitar and the Latin American charango and ronroco. Their filigreed textures intertwine with Angelika’s nuanced touch on harp and piano like the tendrils of two blossoming vines. The couple sing and write songs in both Spanish and English, also drawing from lyrical sources as diverse as the mystical Persian poet Rumi (1207-1273) and the Mexican poet and pan-Latin folk hero Nezahualcoyotl (1429 – 1472). Like the sacred tree for which they’re named, Mirabai Ceiba’s roots run deep, and their branches reach out to take the world in a musical love embrace.

Mirabai Ceiba’s artistry and renown have grown with each new album they’ve released. Ocean was named Best Vocal Album of 2008 by New Age Reporter. A Hundred Blessings (2010) received the years’ best honors from L.A. Yoga magazine. Mirabai Ceiba made it onto several international best-seller lists with 2011’s Awakened Earth. It was followed by Between The Shores Of Our Souls (2012), which made New Age Music World ’s Top 10 list, also claiming Best Vocal Album honors at the ZMR Awards. Their 2015 release, Sevati, reached number 1 in over 13 countries on the iTunes World Music charts.

The group’s most recent album, Agua de Luna, represents a major turning point in Mirabai Ceiba’s career. Their first self-produced, self-released disc, it is also their broadest record in scope, with songs that are deeply introspective and others that are jubilantly universal. Superbly crafted, their artistry shines with newfound brilliance.

Along with their recordings, Mirabai Ceiba’s prolific touring and inspirational concerts have also helped build a devoted global following and garner media praise. They played for a spellbound audience of 5,000 on the shores of Rio de La Plata in Buenos Aires, and for over 1,000 at the University Concert Hall in Tel Aviv. Sold-out shows at Mexico City’s famed Teatro de la Ciudad, Moscow’s International House of Music, the Palladium in Warsaw and the National Concert Hall of Estonia have delighted Mirabai Ceiba’s international fan base. Legendary and beautiful venues such as London’s Union Chapel, L’auditori in Barcelona and Teatro Nuevo Apolo in Madrid have all proven ideal settings for Mirabai Ceiba’s music. Their concerts are joyous and loving occasions that embody the duo’s profound belief in music as a universal language, uniting all the world’s peoples, cultures and traditions.

“Where language stops, music begins,” says Markus. “We go to Argentina and sing there, and two months later we’re in Amsterdam singing the same songs and people connect with them in a similar way. It’s truly beautiful and inspiring.”

“We wish to create this space where people can come to a quiet place inside themselves, where they can really listen,” Angelika adds. “Then the chanting or musical interaction becomes much deeper. We need to come from silence; any creation comes form a quiet space first—from nothing.”