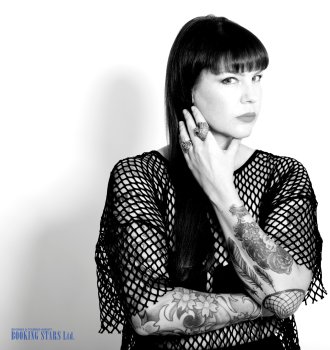 Miss Kittin (real name - Caroline Hervé, Caroline Hervé) is a vocalist, disc jockey and musician working in the genres of electroclash and techno. She was born in 1973 in the French city of Grenoble. She is best known after the start of co-creation with The Hacker; Remixes are still being released for songs such as "Frank Sinatra", "Stock Exchange", "Rippin Kittin" and "1982", recognized as classics of the genre. In 2004, Miss Kittin released her first "independent" album, "I Com", for which she herself wrote both the music and the lyrics.

Miss Kittin's style is characterized by texts of an aggressive social orientation (anti-glamor, cloning, criticism of show business) and cold minimalist music written with the help of analog synthesizers. Many of the lyrics are distinguished by some cynicism and the content of profanity, and the topics are mostly close to punk rock. Some of these compositions have caused scandals - for example, the heirs of Frank Sinatra after his death threatened legal proceedings for the phrase in the composition of the same name by Miss Kittin: “You know Frank Sinatra? He’s dead, ha-ha-ha! "

Miss Kittin has worked with artists such as The Hacker, Goldenboy, Sven Vath, Steve Bug, Felix Da Housecat, Chicks On Speed, Vitalic and many other musicians.

Caroline Hervé, stage name Miss Kittin, is a French electronic music DJ, singer, and songwriter. Over the years, she has become one of the most inspiring DJs to emerge within the electronic music scene. Miss Kittin rose to fame with her 1998 singles ‘1982’ and ‘Frank Sinatra’ in collaboration with The Hacker. Her solo album “I com” was released in 2004; the second, “Batbox”, came in 2008; and the third, “Calling from the Stars”, in 2013. Kittin’s first two albums were released on her own label Nobody’s Bizzness.

Kittin has released a couple of remixes and collaborations in in 2011: the ’All You Need’ EP on Mobilee Records brought her punchy vocals with a classic electro bassline. Miss Kittin is rightly named as one of the most revered artists in electronic music today.