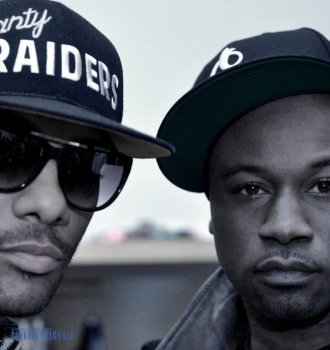 Bright guys, a truly cult collective, no matter how worn out this word may look. They are said to be the cornerstone of New York hardcore. Their name - Mobb Deep - is reminiscent of the bully word "mob" that plunges most young rappers into panic. Overseas rappers can hardly be intimidated by pseudo-patriots, characters such as Prodigy and Havoc will scare any guardian of the purity of the white race themselves. These guys will quietly and measuredly promise to make you hell on earth and clearly demonstrate what killing music is.

Prodigy and Havoc meet at the prestigious Art School in Manhattan. Presumably, there would be no place for stupid ghouls-scumbags in an art school. So we can do without clichés about the narrow-mindedness and universal criminality of black rappers. Pi and Hev are out of this cliché.

The first half of the 90s was a strange time for America. While the fathers were celebrating victory in the Cold War, their children were severely depressed. And if white teenagers were killed by heroin under the growl of grunge, then their black peers preferred crack and the darkest rap. Mobb Deep's "Juvenile Hell" was one of the first to capture this mood of despair and emptiness.

The refined style acquired by the group in the mid-90s is not yet visible, at times, at times, it was not in tune with the tempo, but the general outlines of the future Mobb Deep are already being drawn. The hometown of Queensbridge was a lavish gift of ideas, and Pee and Hav turned them into poems that made the most impressionable listeners uncomfortable.

Young talents fell under the tutelage of Queensbridge comrades in arms - those who are older. Among the guardians was, by the way, Large Professor, who did a lot to promote Queensbridge - the success of the first Nas album has a lot of merit of this person. The result of their work in 1993 was published by the label 4th & Broadway and had, let's say, local success. Deciphering - almost no money and very little attention from the audience. Not surprising, given the youthful immaturity of the material and the small possibilities of the label.

In 1995, Mobb Deep released the phenomenal album "Infamous". This time they independently wrote all the music for the disc, except for a couple of tracks, the production of which was the work of Q-Tip from A Tribe Called Quest (by the way, a year earlier he worked on the legendary debut of Nas, the album "Illmatic"; it looks like the guy has good taste and participates only in projects that are destined to "change style").

"Infamous" turned out to be one of the most realistic gangsta albums ever. Tough horror stories about the surrounding troubles - garbage, evil scum from the quarter ... A naturalistically reproduced hostile atmosphere of Queensbridge, where every quarter is a war zone. Only tar-thick dark tones, gloomy music and heartbreaking stories from the streets of his native area. Almost like in the song - "In the black-black city on black nights / black ambulances with black doctors ..." - one hundred percent chernukha !!! The measured reading of Prodigy and Havok - quiet and almost without intonation - became their hallmark. Combined with a well-defined rhythm (thanks to the "protruding" drums) and a minimum of instruments, it had a hypnotic effect. The hit "Shook Ones, Pt. 2" became a real manifesto of its time. The doom and despair of a confused generation: "Sometimes I wonder do I deserve to live / or am I going to burn in hell for all the things I did."

The further you go, the more you begin to share the belief of the Chinese in the golden age that already existed on earth, from which with every year of life, mankind is adamantly moving away. Well, what about the fact that all the great hip-hop albums have already been recorded and remain unmatched? So it was with many, so it was with Mobb Deep, because "Infamous" was unconditionally the best, and then there was a gradual decline. Not clearly expressed, but still ...

In 1996, Mobb Deep fans, and there were many of them, lined up for the new release of the Kings of Queensbridge. Thanks to their efforts, the album, called "Hell on Earth", climbed to 6th place on the Billboard chart - in the general chart, where their sales were compared to various Michael Jackson and Madonnas. The result is impressive. However, after the success of "Infamous" it could not be otherwise. Prodigy and Havok continued to whine about the fatigue of "life like that" and rap's transformation into a bloody sport. For greater commercial appeal, tracks were recorded with Nas (a fellow in the area), Method Man and Raekwon (like-minded people in hardcore style).

The next album had to wait a long time - the pause was taken for three years. Not everything went well: the release date was repeatedly postponed, then the working version of the disc with three dozen tracks fell into the hands of the pirates. Fans of Mobb Deep were not embarrassed by the poor sound quality, and the bootleg began to rapidly spread across the States. Here we had to hurry up and release "Murda Muzik" as soon as possible. Despite all the efforts of the pirates, the disc reached number three in the charts and brought the duo platinum. The hit "Quiet Storm" from this album is considered one of the program tracks of Mobb Deep, "It's Mine" with the participation of Nas sounds great. While Havok's production skills on "Murda Muzik" are worthy of the highest praise, this release marks the first time that Mobb Deep is actively seeking help from third-party beatmakers. Nevertheless, this does not prevent them from maintaining their signature sound - the strict beat of Mobb Deep had already become a trademark by that time. Which they playfully abandoned on the next disc.

The album "Infamy", released in 2001, shocked the fans of the duo. It wasn't Mobb Deep at all. Deadly realism disappears somewhere, the sound becomes softer, and the album's main hit is the melodic ballad "Hey Luv (Anything)" featuring soul quartet 112, known for working with artists on the Bad Boy label - "Betrayal of the Motherland". All this was called the expansion of the audience, in fact - a change of reference points in creativity, adjustment to a more relevant format. If you look closely at the hardcore scene, you will realize that not only Mobb Deep have done this. The duo of Queensbridge murderers were among the first hardcore renegades.

Another interesting fact is the amazing tolerance shown by members of Mobb Deep towards Jay-Z. The Brooklyn rapper mixed them with mud on the track "Takeover", unveiled shortly before the release of "Infamy". Previously, Pi and Hav have already got into similar situations and always gave a decent answer, even 2Pac got his own in the track "Drop a Gem on 'Em" from the album "Hell on Earth". And here they were silent ...

Not long after the release of "Infamy", the Loud label ceased to exist and the group remained, as they say in sports, a free agent. Those interested in basketball for example know that it's good to be a free agent when you are young, full of energy and have just become the MVP of the regular season. Then you will be besieged by agents of all the leading clubs (in our case, labels) and flooded with promising offers. But if your achievements are in the past, and your years are close to retirement, completely different horizons open up ...

In 2003, Mobb Deep muddied the release of the mixtape, in which they proclaimed themselves free agents: "Free Agents (The Murda Mixtape)". The disc contained almost four dozen tracks and was encouraging by the prospect of returning to abandoned positions. But these hopes were not destined to come true, and two times in the same water did not enter. At least from the statements of the band members made before the release of the album, it followed that the group was striving to expand its audience in every possible way. What should be understood as, "we want to make good money." Natural desire, who doesn't want to.

Album "Amerikaz Nightmare" went on sale on August 10, 2004. It is known that on the new release, the main part of the production is made up of the Havok beats. In addition, there is Alchemist, without which no Mobb Deep album is complete since "Murda Muzik". And also the people with whom it is customary to reckon today - the cool peppers Lil` Jon and Kanye West. Jadakiss, Nate Dogg, Lil Jon and Twista will feature as guests on American Nightmare tracks. Already, observers predict mega-sales (in the first week, about 150 thousand copies of the disc were sold).

Times change - Ghostface and Method write funny songs with Missy Elliott, Mobb Deep collaborates with Lil Jon and Twista ... It remains to see some Usher and Chingy in the list of members of the next Wu-Tang album. And then the coffin with New York hardcore can be nailed down and lowered to the required depth of 6 feet.

Mobb Deep is the best choice for your birthday party or any other corporate event! Fill in the application form on our website and enjoy the band's performance!