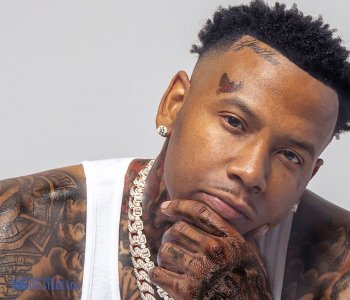 Memphis rapper who brings grit and menace to his rhymes about street life.

Memphis rapper Moneybagg Yo brings grit and menace to his rhymes about street life.

The prolific MC began releasing mixtapes in 2012, and became a regular fixture on the higher reaches of the Billboard 200 chart starting with his Top Five-charting mixtape Federal 3X in 2017, and continuing with studio albums like 2020's Time Served.

2 FederalBorn Demario White, his earliest mixtapes, From da Block 2 da Booth and October 20th, both appeared in 2012. Following additional tapes such as 2015's Relentless and Federal, he began receiving more attention, and he won a Memphis Hip Hop Award for Mixtape of the Year.

Released in 2016, Federal Reloaded featured Y Grizzle, Young Dolph, and OG Boo Dirty, while the follow-up, ELO (Everybody Lives On), included guests like Yo Gotti ("A Lot of 'Em") and Migos' Quavo ("Days n Nites"). His work with Yo Gotti continued on a joint effort entitled 2 Federal.

HeartlessHeartless arrived in early 2017 and charted on the Billboard 200.

The album featured YFN Lucci ("Wit This Money") and Lil Durk ("Yesterday"). Another mixtape, Federal 3X, followed later in the year, and debuted at number five on the Billboard 200. Months later, Moneybagg issued a collaborative mixtape with YoungBoy Never Broke Again, Fed Baby's. He kicked off 2018 with the release of 2 Heartless.

Peaking at number 16 on the Billboard 200, his 11th solo mixtape featured guests like Quavo and fellow Memphis rappers BlocBoy JB and Yo Gotti.

Bet on Me, including appearances from Young Thug and Gunna, followed in August. That November, he issued his official studio debut, RESET. Another album, 43va Heartless, arrived in May of the next year, reaching number four on the Billboard 200.

The rapper kicked off 2020 with Time Served, his third studio album, which went one better, debuting at number three. A deluxe version of Time Served appeared later that year featuring seven additional tracks.