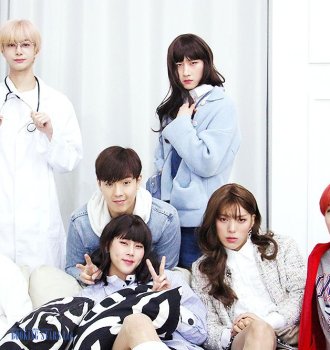 In December 2014, Starship Entertainment launched a survival talent show No Mercy on the Mnet channel. The finalists were Shownu, Wonho, Minhyuk, Kihyun, Hyungwon, and Jooheon. I.M. was the only member, who joined the show in the middle, but still managed to become part of the group. The band recorded its debut single “Interstellar” at the show’s finals. Its producer was Yella Diamond.

In May 2015, Monsta X recorded its first EP, Trespass. The album reached the 5th spot of South Korean Gaon Albums Chart. It featured such successful songs as "No Exit", "One Love", "Honestly", and "Steal Your Heart".

A short while later, the group presented a new EP, Rush. The album appeared on the 3rd spot of South Korean Gaon Albums Chart. Singles "Hero", "Perfect Girl", "Amen", and "Broken Heart turned into hits. The group also recorded music videos for "Trespass", "Rush", and "Hero". The latter collected more than 73 million views on YouTube. The song itself reached the 12th position on Billboard World Chart.

In May 2016, the group recorded one more EP, The Clan Part.1 Lost. In October, the second part, The Clan Part.2 Guilty, came out. The first album climbed to the 3rd spot of South Korean Gaon Albums Chart and settled on the 5th position of US Billboard World Albums Chart. The second disc reached the 2nd and 3rd positions of the same charts accordingly. Both of them were commercially successful, selling around 100,000 copies each. After that, many fans tried to book Monsta X for private events but rarely succeeded.

In 2016, the artists arranged their first live concert "X-Clan Origins". The tickets sold out in under ten minutes.

In March 2017, the group recorded its debut LP, The Clan Pt. 2.5: The Final Chapter. A separate version was recorded for the Japanese audience. The album was highly commercially successful, selling 200,000 copies in South Korea, 10,000 in Japan, and a thousand in the USA. It came in 2nd on South Korean Gaon Albums Chart and topped US Billboard World Albums Chart. Tracks "Oi", "Miss You", "Calm Down", and "Beautiful" became hits. The latter made it into the top-10 of Billboard World Singles Chart.

In November 2017, Monsta X presented an EP, The Code. The album topped the national chart, came in 16th on Japanese Albums Chart, and reached the 2nd spot of US Billboard World Albums Chart. The tracklist consists of just 7 songs. One of them, “Dramarama” became a hit in the USA.

The new EP, The Connect: Dejavu, came out in March 2018. The songs "Jealousy", "Crazy In Love", "Destroyer", "Fallin'", and "Lost In The Dream" became hits. The album reached the 2nd position on South Korean Gaon Albums Chart and US Billboard World Albums Chart.

In April 2018, the group released an LP for the Japanese audience. Piece was produced with the assistance of Universal Music Japan. It reached the 3rd spot of the Oricon chart.

The new LP Take.1 Are You There? Came out in October 2018. It topped the national chart, came in 7th on the Japanese chart and Billboard World Chart. The same year, the group arranged two tours, 1st Japan Live Tour and The Second World Tour "The Connect".

Before the year’s end, the artists earned a prize for Artist of the Year and Best Icon at Asia Artist Awards, as well as other prestigious awards and nominations.

Monsta X is at the peak of their success. They record new songs and tour the world.