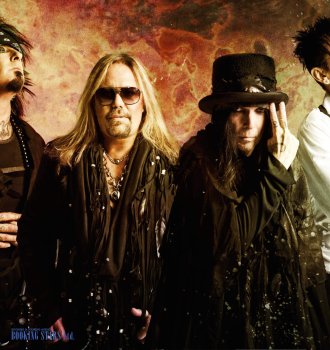 The heavy metal band Motley Crue was formed in Los Angeles, in 1981. The final lineup includes Nikki Sixx, Mick Mars, Vince Neil, Tommy Lee. The band is inducted into Hollywood Walk of Fame. It holds several awards, including American Music Awards. Motley Crue is mostly famous for such songs as “Dr. Feelgood”, “Without You”, “Kickstart My Heart”, and “Smokin’ In the Boys Room”.

In 1982, Motley Crue signed a deal with Elektra Records and rereleased their demo album Too Fast for Love. The next year they released another album Shout At The Devil. Both albums were eventually certified platinum in the USA. The next album Theater of Pain (1985) sold over 2 million copies in the USA only. The next LP Girls, Girls, Girls,(1987) reached the 2nd spot on Billboard 200. It was the first heavy metal album to reach such high spot on this chart.

The band went through some lineup changes and released a hit album Dr. Feelgood (1989). It became the band’s most successful LP. The album topped Billboard 200 and was certified platinum 6 times in the USA and 3 times in Canada. The singles from that album “Dr. Feelgood” and “Without You” became big international hits.

In 1992, Vince Neil suddenly left the band and created his own project Vince Neil Band. He was replaced by John Corabi. The band terminated the deal with their label and went on an unsuccessful North American tour. Neil came back to Motley Crue in 1996. At about the same time Tommy Lee received bad publicity because of his scandalous marriage to Pamela Anderson. Eventually, he left the band in 1999 and came back in 2005.

In 2006, Motley Crew and Aerosmith went on a Route of All Evil Tour. In June 2007, the band went on a small European tour. The same year, band filed several claims against Tommy Lee’s manager to get money back for image problems thanks to Tommy Lee’s reality show appearance. The claim was settled and they went on to file another claim against Neils’ manager.

The band released 4 more studio albums, the latest one to date being Saints of Los Angeles (2008). They went on many different tours and participate in festivals but didn’t release any more albums. In 2015, the band announced the retirement and gave supposedly last concert on December 31st.