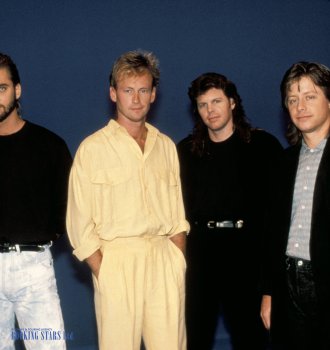 «Mr.Mister» is a rock-group from the United States which was created in 1980. The main genres are new wave and pop rock.

Mr. Mister is a pop / rock band from the United States formed in the 1980s.

The quartet turned out to be the successor to Pages, where Page worked with George from 1978-81. General information Initial line-up Discography Audio Country USA Genres Pop rock - New wave Time of existence 1982 - 1990 Early activities of the band Mr. Mister Four appeared in Phoenix, Arizona, but was based in Los Angeles. Prior to the band's emergence, Richard worked as a session performer for Quincy Jones and composed compositions for Michael Jackson, Donna Summer, Rick Springfield, Al Jarreau and Kenny Loggins Loggins).

In 1978, Paige formed the Pages project with childhood friend George. The guys worked in the pop fusion genre with a variety of session musicians.

The guys recorded the hit I Do Believe in You, released three albums, which critics praised. But due to minor commercial success, the project fell apart in 1981. The duo worked in the studio, recording songs for Laura Branigan, The Village People and other pop artists.

By 1982, friends and partners decided to form a permanent pop group, bringing in Mastelotto and Farris. At first, the band wanted to invite a bass player.

But then Page realized that he could play the role of vocalist and bassist, which is why the quartet was preserved in its original form. Top Peak of popularity: signing contracts and albums In 1984 the performers released their debut LP I Wear the Face on RCA Records.

At this time, Page received an offer from Toto, where he needed to replace frontman Bobby Kimball (Bobby Kimball).

Soon he was called to Chicago instead of Peter Cetera, but the musician refused both times. In 1985 he released his second studio album Welcome to the Real World with lyrics by John Lang.

The release turned out to be a breakthrough one for Mr. Mister. All three singles hit the Top 10. Kyrie and Broken Wings topped the US pop charts. Several video clips are published, which were often played on MTV.

In 1986, the band played on MTV's original Spring Break show. Then the team was twice nominated for a Grammy, including the nomination for "Best Pop Group". During this period, the guys traveled with Don Henley, The Bangles, Eurythmics, Heart, Tina Turner.

The third album Go On ... was not a commercial success.

The project is recording the title track for the film Stand and Deliver and an additional song for Stakeout.

The hit Don’t Slow Down sounded in the film A Fine Mess. The guys played live with The Bangles.

Up The decline of creativity and disintegration In 1988 the band left Steve Farris (Steve Farris).

The other members teamed up with Paul Clark, becoming a backup quartet for the indie material Awakening from the Western Dream in 1988.

By 1990 the songs were recorded, but RCA Records did not want to release them. The project fell apart, the studio album was not released for 20 years.

The song Waiting in My Dreams was included in the quartet's hit compilation in 2001. In 2010 the guys together with Sony Music released an updated LP on Page's Little Dume Recordings label.

Many years after the disbandment. the ensemble was reminded by the group Train in the track Hey, Soul Sister.