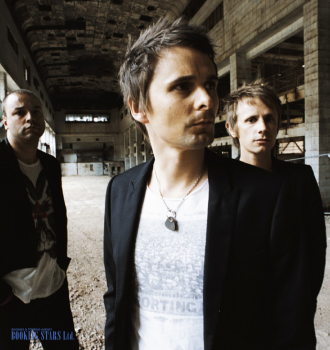 At the beginning of the 1990s, Matt Bellamy, Chris Wolstenholme, and Dominic Howard played in different music groups in Teignmouth College in Devon, England. After some time, Matt was invited to Dominic’s group as a guitar player. Later, Chris joined them when one of the band members left. Wolstenholme had to learn how to play bass guitar to stay in the band.

In 1994, the band managed to win one of the local music contests. The victory inspired young artists to devote their lives to music. They decided not to continue their education. To show themselves and earn some money, the group started performing at the local nightclubs.

In the 1990s, Muse gave several concerts in Manchester and London. Soon they met a producer Dennis Smith, the owner of a recording studio, Sawmills. Musicians signed a contract with the label, Dangerous, and released their first EP, Muse. The next EP, Muscle Museum, came out in 1999. It caught the attention of a British music reporter Steve Lamacq. He helped the group appear on the radio.

Even though the debut EPs were successful, British labels weren’t fighting for Muse’s attention. The artists went to the United States to give concerts arranged by Maverick Records. They were so successful that by the time the band came back to the UK, there was a line of labels offering contracts.

In 1999, the group presented its debut LP, Showbiz. It became platinum. At that time, many fans tried to book Muse for private events, but the artists rarely agreed. They were busy recording new songs and giving live performances.

Muse’s next album was Origin of Symmetry, recorded in 2001. Five years after its release, Q Magazine put it on the 74th position of its 100 greatest albums of all times list.

The third LP, Absolution, came out in 2003. It immediately topped the UK Albums Chart. Many singles featured on the album became hits. Initially, the artists were planning to add orchestra music to the songs, which was meant to improve the listeners’ mood. However, several events made them change their minds.

Some fans believe that the war in Iraq affected the group’s intentions. Eventually, the artists came up with a tragic and apocalyptic sound for their albums’ tracks, which made them even more popular.

After the release of the third LP, musicians embarked on their first big tour, which continued for almost a year. The group performed in the United States, Australia, New Zealand, France, and Canada. In 2004, the artists headlined Glastonbury festival.

In 2006, Muse presented its fourth LP, Black Holes and Revelations. The LP sold 100 000 copies in the first week. It topped the UK and European charts and came in 9th on Billboard 200. With time, the album became platinum.

In the fall of 2009, the band released a new LP, The Resistance. It was the artists’ first independent release without the assistance of third party producers. The album sold 500,000 copies in one week. It topped 19 charts and came in third on Billboard 200.

To support the LP, the band embarked on a long tour, which began with a concert in Finland on Hartwall Arena. After performing all over Europe, the artists attended the Big Day Out festival in Australia and then toured the United States.

In 2011, Muse went on a tour of Russia, Latin America, and Ukraine.

In 2012, the band presented a new LP, The 2nd Law, which turned out to be less successful than the predecessor. However, it still managed to become platinum and top many charts. Two years later, the band began working on a new LP, the sound of which had to be similar to Muse’s early work.

In 2015, Drones came out. It easily topped numerous European charts and conquered Billboard 200. Singles “Deep Inside” and “Pscyho” became hits.

The latest Muse’s album to date is Simulation Theory. It came out in 2018 with the assistance of Warner Bros and Helium-3 labels. The LP featured such hits as "Pressure", "Something Human", "Thought Contagion", "Dig Down", and many more.