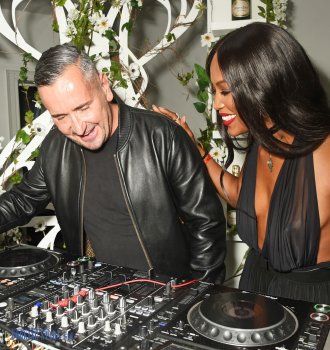 Should you be looking for an all-star DJ team to come and light up your event, function, product launch, fashion show or anything else, then Fat Tony & Naomi Campbell make a perfect choice. When the claimed duo of established DJ Fat Tony and celebrated super model and TV star Naomi Campbell come together, magic happens, people dance and memories are made. The duo have performed at some high profile events for some key international clients, including playing at places like Amfar in Brazil.

Fat Tony is a key player on the London scene and has been for decades. As well as promoting his own pioneering garage parties, he has also become a resident DJ at a number of key clubs in the capital. Further afield he is often booked to play influential events and clubs around the world and is as embraced by the gay community as he is the straight scene.

Naomi Campbell, of course, needs little introduction – as the face of many top global brands and business, she is one of the most notable super models of her generation, has had many high profile relationships and is the sort of star who adds real appeal to any event or occasion. As well as being a regular judge on model show The Face, Naomi has embarked on plenty of other ventures including making an R&B-pop music album and several acting roles in film and television. Booking this par to play your event is sure to get everyone talking.