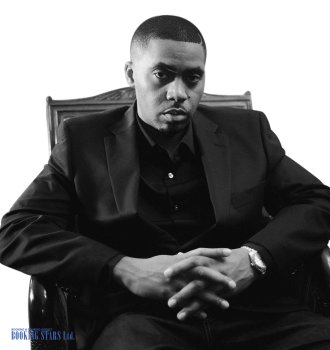 Nas’s real name is Nasir Bin Olu Dara Jones. He was born on 14 September 1973 in Brooklyn. His mother worked at the post office, and his dad was a musician. He performed jazz and blues songs. The artist has a brother, who performs under the pseudonym Jungle. He is part of the boy band Bravehearts.

When he was a child, Nasir’s family moved to Queens. A while later, his parents divorced. The young man was so shocked that he couldn’t continue his studies and dropped out of school. He joined different African American organizations, such as Nuwaubian Nation and Five-Percent Nation. At that time, Nasir learned how to play the trumpet and write poetry.

At the end of the 1980’s, the rapper met Large Professor. The producer changed the young man’s life and helped him record the first single. The rapper presented “Halftime”, which he worked on earlier. It became a soundtrack to the movie Zebrahead. When Nasir turned 19, he signed a contract with Columbia Records. The critics liked his work and predicted that Nas will become successful.

In 1994, the rapper released his first LP, Illmatic. It was very successful for a debut album. The Source magazine called it the best album of 1994. The LP reached the 12th spot on Billboard 200 and sold 60,000 copies in the first week. Eventually, the album became platinum.

In 1996, Nas released the second studio LP, It Was Written. It topped Billboard 200. Such songs as "The Message", "I Gave You Power", "Street Dreams", "I Gave You Power", and "If I Ruled the World (Imagine That)" became hits. The artist acquired numerous fans. Many of them tried to book Nas for their private events.

In 1999, the artist recorded two albums, I Am... and Nastradamus. The first one topped Billboard 200, and the second one came in fourth. Both LPs were highly commercially successful. In the first week, they sold 470,000 and 232,000 copies accordingly.

In 2001, Nas presented Stillmatic. It reached the 8th spot on Billboard 200. In the first 7 days after the release, the fans bought 342,000 copies. As of today, more than 2 million copies have been sold. The album’s guest artists were Mary J. Blige, Bravehearts, Amerie, Keon Bryce, and Millennium Thug.

In 2002, the rapper recorded God's Son. It was slightly less successful than his previous work. The album climbed to the 18th spot of Billboard 200 and sold 156,000 copies in the first week.

Two years later, Nas came up with Untitled. It was recorded together with Keri Hilson, Chris Brown, The Game, and Busta Rhymes. It debuted on top of Billboard 200 and earned a gold certification.

In 2018, Nas presented Nasir, recorded together with Shake, Puff Daddy, Tony Williams, and The-Dream. The songs "Cops Shot the Kid" (with Kanye West), "Not for Radio”, and "Adam and Eve" are gaining popularity.