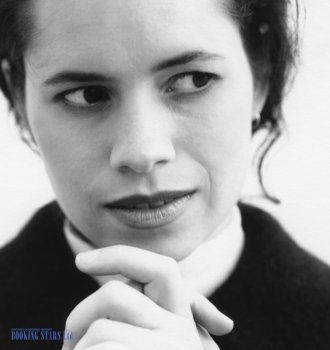 She is familiar with music since childhood - her grandfather played the accordion, mandolin and guitar, and the mother of the future singer was very fond of the work of The Beatles, Al Green and other performers.

It was she who greatly influenced Natalie's desire to make music. For a long time, Merchant listened to classical music and jazz, which undoubtedly influenced her work.

Natalie's professional musical career began in 1981, when she became a vocalist in the alternative rock group Ten Thousand Maniacs. After twelve years of joint creative activity, Merchant decided to leave the team and start a solo career, especially since the experience and the number of new ideas allowed her to do this completely without any obstacles.

The desire to start working on her own material was so great that on the same day the singer announced her departure to the 10,000 Maniacs members, she came home and wrote the song I May Know The Word.

This song was later included on Natalie's debut album Tigerlily, released in 1995. The disc received good reviews from critics and fell in love with music lovers, who had to wait three years for the singer's next disc. So, in 1998 Natalie released her second solo work, called Ophelia. And this time Merchant's album received excellent reviews from critics and, on the whole, turned out to be successful in all respects. In addition, music lovers received hits such as Kind & Generous, My Skin and many others. In 1999, Natalie's first live album Live In Concert was released, recorded at the Neil Simon Theater in New York, and it was on this disc that the original cover version of David Bowie's song Space Oddity was presented.

The sound of this album turned out to be very diverse, and the composition Tell Yourself reminded of the times of 10,000 Maniacs with its mood. Photo Photo by Natalie Merchant The singer dedicated Motherland to all those killed in the September 11 terrorist attack, despite the fact that the work on the disc was completed two days before the tragic events.

Natalie also decided to change the cover of the album: it was originally planned that it will depict children playing in the field in oxygen masks. But in the light of the tragedy, such a photo would be too contradictory, and Merchant at the last moment decided to abandon this idea.

In 2003, Natalie's discography was replenished with a new work The House Carpenter's Daughter, performed in folk style.

In 2005, the singer's fans received a wonderful gift in the form of a collection of Natalie's best songs Retrospective: 1995–2005, which included such famous compositions as Wonder, San Andreas Fault, Sally Ann and many others.

In 2010, the singer released a gorgeous concept album, Leave Your Sleep, dedicated to poetry in its most diverse forms. Thanks to an interesting idea and excellent performance, all music lovers received an original and strong disc that will appeal to both old Natalie fans and those who are just going to get acquainted with her work.

Invite your favorite singer for a special event right now straight on our website!