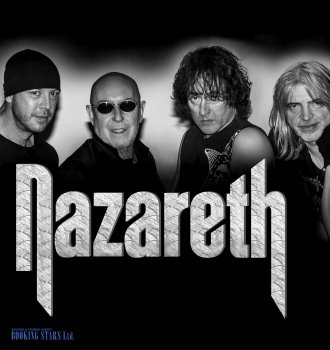 This hard rock band from Scotland started performing in 1968. Their career continues until the present day. Their most famous hits were “Hair of the Dog” and “Love Hurts”. The original members of the group were Dan McCafferty (vocalist), Manny Charlton (guitarist), Pete Agnew (bassist), and Darrell Sweet (drummer).

In 1971, the group signed contract with Trident Studios and recorded their debut album “Nazzareth” together with a famous producer Thomas Baker, who later worked with Queen. The album basically failed, but the band didn’t give up. In 1972, the group released their second album, “Exercises”. It was more popular than “Nazzareth”. It was a style experiment that showed how different the band could sound. Critics were saying that the band doesn’t have a future since they don’t possess one certain style. However, the musicians kept experimenting and recording new songs while going on tours.

In 1972, Nazareth joined Deep Purple on the USA tour. The tour was a big success. A year later, the band released their third album “Razmanaz”, which gained popularity in Europe and Japan. It went as high as the 11th place on the British charts. Singles “Razamanaz” and “ Bad Bad Boys” become hits.

The band goes on recording one album each year. In 1975 they released a hard rock album “Hair of The Dog” that included such famous song as “Hair of The Dog”, “Miss Misery”, and “Please Don’t Judas Me”. But the biggest hit was the song “Love Hurts”, which the band sang at each of the live concerts throughout their career.
The group continued with the hard rock style but in 1977 they recorded “Expect No Mercy”, which had some traces of heavy metal. The musicians went on a tour and released another heavy metal album “No Mean City”, which wasn’t as popular as they hoped due to the lack of new ideas.

In 1980, the group made a decision to soften their style and added some pop to their rock. The result was “Malice In Wonderland”. The group continues using this style and gains even more popularity.

Throughout its 40-year career, the group released 23 albums and changed their lineup 11 times. Out of the original band members, only Pete Agnew is still performing.