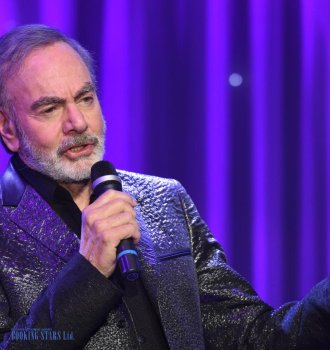 Neil Lesley Diamond was born on 24 January 1941 in New York. When he was in high school, Neil sang in one choir with Barbara Streisand. On his 16th birthday, Diamond got a guitar and started writing songs.

In 1963, the artist signed a contract with Columbia Records and released a single "At Night" b/w "Clown Town". It earned high scores from Billboard magazine but didn’t make it into the charts.

In 1965, Neil wrote, "Sunday and Me", which became his first big success. The song was performed by Jay and the Americans. It reached the 18th spot on Billboard Hot 100 and stayed in the chart for 8 weeks.

The first hit song performed by Diamond was “Solitary Man”, which came out in February 1966. It reached the 55th spot of Billboard Hot 100 and then climbed to the 21st position.

Diamond’s debut solo album, The Feel of Neil Diamond, came out in 1966. It reached the 137th spot on Billboard 200. One more hit written by Diamond came out at the end of the year. “I’m a Believer” was performed by The Monkees. The song topped the charts in the UK, USA and several other countries. The total sales of the song exceeded 10 million copies. Many fans dreamed of booking Neil Diamond for their private events.

In the spring of 1968, Diamond signed a contract with Uni Records. Between 1968 and 1972, he released five albums under that label. The most successful among them were Tap Root Manuscript (1970), Stones (1971), and Moods (1972). The first one reached top-20 on Billboard 200 and UK Albums chart and earned a platinum status in the USA. Stones reached higher spots on the charts but earned a gold certification. Moods settled on the fifth position of Billboard 200 and went platinum.

Between 1973 and 1979, Diamond gave Columbia Records another chance. He recorded six studio albums. Each one of them reached top-10 on Billboard 200 and earned platinum statuses. The most successful of them was Jonathan Livingston Seagull, which became a soundtrack for the same name movie. The album reached the 2nd spot of Billboard 200 and topped ARIA chart.

One more soundtrack album, The Jazz Singer, came out in 1980 under the label Capitol Records. It showed great sales, earning five platinum certifications in the USA and one in the UK.

Between 1981 and 2010, Diamond released 16 albums under Columbia Records. Among them were The Christmas Album (1992), which became platinum twice in the USA, and 12 Songs (2010), which settled on the 4th spot of Billboard 200. Another famous album written during this period was Home Before Dark (2008). It topped USA, UK, and New Zealand charts.

In 2014, Diamond released his 32nd studio album. Melody Road came out under Capitol Records and reached the second spot on Billboard 200. It was also a hit in the UK and New Zealand.

In 2016, Neil released a Christmas album, Acoustic Christmas, which featured a collection of his own songs and acoustic versions of other Christmas tracks.

In 2017, in honor of the 50th anniversary of Neil’s career, he released Neil Diamond 50 - 50th Anniversary Collection, which featured Diamond’s most popular songs. After the release, Diamond went on 50 Year Anniversary World Tour. However, at the beginning of 2018, he had to take a break due to health problems.