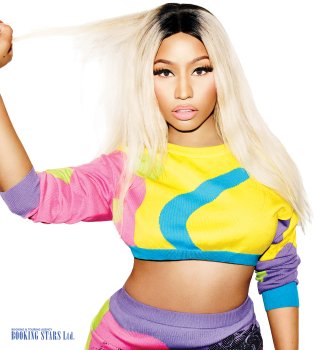 Nicki Minaj’s real name is Onika Tanya Maraj. She was born on 8 December 1982 in Port Of Spain, Trinidad and Tobago. Her mother had Malaysian and Trinidadian roots while her father had Indian, African, and Trinidadian heritage. When Onika was 5, the family moved to the United States.

The future celebrity’s father was an alcoholic and a drug user. He often assaulted the girl’s mother. Due to constant fights and scandals at home, Nicki was forced to spend her nights elsewhere. She could spend the whole night in the car, writing poetry. Back then, she came up with the draft lyrics for the popular song “Autobiography”. Onika attended Elizabeth Blackwell Middle School and Fiorello H. LaGuardia High School.

In the early 2000’s Nicki signed a contract with Dirty Money Records. Together, in 2007, they recorded her first mixtape, Playtime Is Over. The second mixtape, Sucka Free, came out in 2008. A year later, she released Beam Me Up Scotty. The mixtapes weren’t very popular. However, they helped Nicki Minaj jump-start her career. She was noticed by Lil Wayne, who was already a famous rapper. He offered the singer a contract with Young Money Entertainment.

In 2010, Minaj released her first studio LP, Pink Friday. The fans got a chance to buy two different versions of the disc. The standard version contained 13 tracks while the deluxe one featured 17. Nicki went on a mini-tour to support the album. She visited Washington, Philadelphia, Boston and her native Port of Spain. The LP was commercially successful and reached the top spot of Billboard 200. The single "Your Love" climbed to the 14th position of Billboard Hot 100 and topped Billboard Rap Songs Chart. Such singles as "Roman's Revenge", "Did It On'em", "Right Thru Me", "Moment 4 Life", "Check It Out", and "Fly" were also successful. After the LP’s release, the artist became an international celebrity. Many organizers tried to book Nicki Minaj for private events.

In 2011, Nicki tried herself in acting. She lent her voice to the character of the animated movie Ice Age 4. At the same time, she started working on her next LP, Pink Friday: Roman Reloaded. The promotional single “Stupid Hoe” climbed to the 59th spot of Billboard Hot 100. However, the music video recorded for the single was controversial and banned in 87 countries.

In2012, Minaj became the first rapper to perform at the Grammy Awards ceremony. She sang “Roman Holiday”, which was later featured in her next album.

In April 2012, Nicki released her third LP, Pink Friday: Roman Reloaded. It topped many world charts, including Billboard 200, and sold more than 1.4 million copies worldwide. The disc featured a bonus for the fans. It contained a short film about the singer’s offstage life.

In 2013, Minaj started working to promote cosmetics companies. At the same time, she became one of the judges on the show American Idol.

In 2014, the musician released a promotional single ”Pills N Potions” from her next LP, The Pinkprint. The song climbed to the 24th spot of Billboard Hot 100. Another song from the album, “Anaconda”, reached the second position of the same chart. At that time, Nicki was working closely with Beyoncé.

In August 2018, Minaj is planning to release her next LP, Queen. She already presented two singles, “Chun-Li” and “Bed”. Both reached high spots on the charts. At about the same time as the album’s release, the fans are expecting to see a documentary about the artist’s life.