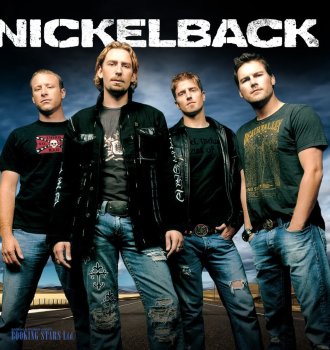 The rock band Nickleback was formed in Canada, in 1995. The current lineup includes Chad Kroeger, Ryan Peake, Mike Kroeger, and Daniel Adair. The band is particularly famous for such hits as “How You Remind Me”, “Photograph”, “When We Stand Together”, and “Lullaby”. They hold numerous awards, including 12 Juno Awards.

At first, the musicians had trouble coming up with a name and a music style. Early in their career, they mostly performed cover versions of other bands’ songs. But they weren’t successful. Chad Kroeger’s parents paid for the recording of a demo album Hesher, which the band released in 1996. Kroeger did a great job promoting the album. His friends were calling radio stations and requesting Nickleback to be played. This simple scheme allowed the band to gain some popularity.

In 1996, the band moved to Vancouver, where they perfumed at night clubs. They earned enough money to release a studio album Curb. The LP wasn’t very successful and neither was the second album The State. However, they both managed to enter Billboard 200. The State sold about 500,000 copies and helped Nickleback earn some popularity. The musicians went on to perform at various concerts.

In 2001, the band released their first very successful album Silver Side Up. It topped Canadian and UK Albums chart and reached the 2nd spot on Billboard 200. The LP sold over 10 million copies worldwide. The single “How to Remind Me” was a big hit on American radio station and even set a record for appearing on the radio more than 3000 times in one week. The LP was certified platinum 6 times by RIAA.

In 2003, the band released the LP The Long Road, which was also very successful. Their melodic yet aggressive style became very popular among the fans. The band continued to give many concerts, which allowed it to become even more popular.