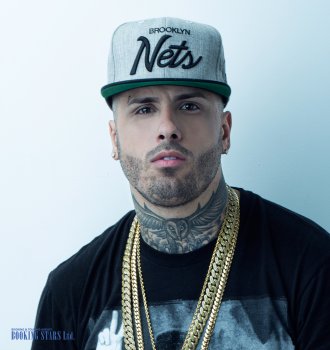 Nicky Jam’s real name is Nick Rivera Caminero. He was born on March 17, 1981, in Boston. Nick’s father is Puerto Rican, and his mother was born in the Dominican Republic. The mix of cultures helped shape the artist’s music preferences.

When Caminero was six, his family had to move to Puerto Rico. The family was poor, and the boy was growing up in the poorest neighborhoods. Homeless men gave him a nickname Nicky Jam, which Caminero later used as a pseudonym. Nick started working early to support his family. He found a job at a nearby store. When there were no customers, Nick practiced singing while standing behind the counter.

One day the singer got lucky. His talent was noticed by one of the customers, who turned out to be a producer. The producer offered Nick to work on a solo album. When he was just 14 years old, Caminero recorded his first LP, Distinto A Los Demás. The album didn’t make it into the charts but caught the attention of famous DJs, Joe, Playero, and Chiklin.

Caminero continued working on his career. In the early 1990’s he met Daddy Yankee. Together they worked as a duo called Los Cangris. The musicians recorded several commercially successful singles, "Sabanas Blancas","Sentirte", and "Guayando". Together the musicians worked on a debut LP, Los Super Amigos, but never managed to release it. In 2001, Daddy Yankee released El Cartel II: Los Cangris, which Nick had a small role in. The same year, the duo fell apart due to disagreements between the members. Caminero decided to pursue a solo career and adopted the pseudonym Nicky Jam.

In 2004, Nicky recorded Vida Escante. He worked together with Trebol Clan, David Deambulante, Don Chezina, Lito, Shaka & Benny, and Rakim & Ken Y, hoping to get to higher spots on the chart. The album climbed to the 23rd position of Billboard’s Top Latin Songs.

In 2017, Nicky Jam recorded a new LP, Fenix. It became the musician’s most successful album to date. The LP topped Billboard’s Top Latin Songs and appeared in the charts of Germany, France, Belgium, and other European countries. Many fans dreamed to book Nicky Jam for their private events. The album featured a hit song “El Perdon”, recorded with Enrique Iglesias. It earned more than 10 platinum certifications.