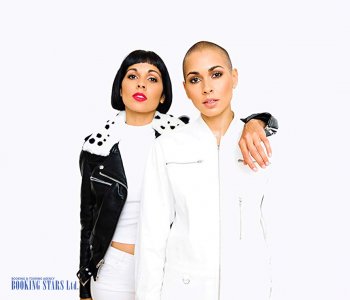 Nina Sky is a duo formed by twin sisters Nicole and Natalie Albino. They were born in Puerto Rico on 13 March 1984. After some time, the family moved to New York. The girls’ parents divorced shortly after the move.

Nicole and Natalie were growing up in Queens. Their mother got married again. Her new husband was a DJ. His passion for music helped girls find a hobby and turn it into a career. By the time sisters were seven years old, they have already written their first song “Sisters”. At nine, they were completely sure that music was their destiny. Both girls worked hard to achieve their dream.

When Natalie and Nicole were 13 years old, they started DJing. Two years later, the artists began performing at local clubs. Parents support the hobby. The stepfather taught both sisters to play the guitar and drums. He also helped arrange auditions.

When making up a name for the duo, the singers used the first two letters of each of their names. That’s how Nina appeared. They chose “Sky” to demonstrate that “sky is the limit”. In 2003, sisters caught the attention of a DJ Cipha Sounds, who was impressed with their work and inspired the young artists to create a demo album. The recordings made their way into the hands of a director of Next Plateau Entertainment, who offered Nina Sky its first contract. Right after signing, the young women started working on a debut LP.

In April 2004, Nina Sky released its first single “Move Ya Body”. It was a huge success. The song climbed to the 4th spot of Billboard Hot 100 and came in 6th on the UK Singles Chart. The debut album, Nina Sky, came out in June 2004. It reached the 44th spot of Billboard 200. Inspired by the quick success, young women continued working hard. Together with NORE, they released "Mas Maíz" and "Oye Mi Canto". They also helped Sean Paul record a single “Connection” for his album, The Trinity.

After that, many artists wanted to book Nina Sky for private events.

In 2005, the duo presented a mixtape, La Conexion. It featured such hits as "Ladies Night", "Your Time", and "Loving You". The next EP cam out in 2010. It was released independently. The sisters called the self-released album, The Other Side.

In 2007, the young women started working on their next album, Starting Today, the release of which was planned for July 2007. However, it was delayed. At the end of the year, the sisters left Universal and signed a contract with Polo Grounds Music. The album never came out.

In 2009, the group joined a French singer Kenza Farah to record a single "Celle Qu'Il Te Faut". The song was released in English and French. The music video for the track was recorded in New York.

At the beginning of 2012, Nina Sky recorded the leading single for the upcoming album, Nicole and Natalie. The artists called it “Day Dreaming”. In the summer, the duo created a music video for the single “Heatbeat”, which became popular on YouTube. Later, they presented another single "Comatose" for the upcoming album. By the end of the year, the sisters canceled their contract with Polo Grounds Music.

The album Nicole and Natalie came out in July 2012. It featured eight songs and became commercially successful. Critics gave the album numerous positive reviews. However, the LP didn’t make it into the popular American charts.

In March 2013, the band recorded a new mixtape, Valentine's Day. In December, the artists presented a promotional single “Overtime”. It was available for digital download.

The sisters took a short break to work on other projects. In 2014, they collaborated with Smoke DZA to record “Stoners”. The single became successful reaching the top-10 of the New Electronic Music Chart. Shortly, a music video for the single came out.

In October 2014, Nina Sky helped Lady Bee record “Do It All Again”. The song was part of her album.

In 2015, Vito Fun and Spaceplant recorded a remix for the sisters’ single "Forever”.

In 2016, the young women signed a contract with Warner Music Group and Tommy Boy Entertainment. They continue recording new hits and performing live. Fans are awaiting the next LP, Brightest Gold. The release date hasn’t been announced yet.