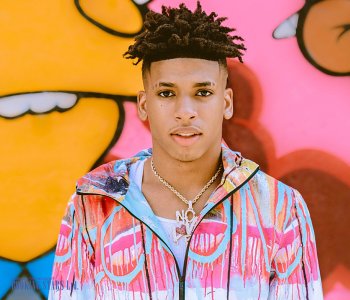 Memphis rapper NLE Choppa rose to fame almost overnight on the back of a viral hit and a charismatic social media presence. At just 16, he was fielding record deal offers from major labels, sometimes with advances in the millions. Ever the entrepreneur, NLE Choppa turned down the contracts, opting instead for a distribution deal that allowed him to keep the rights to his music. Eventually, he succumbed to the temptation to work with the majors, cutting a deal with Warner Records for his 2020 debut studio album, Top Shotta.

NLE Choppa was born Bryson Potts in 2002. Raised in a rough part of Memphis, Potts focused on basketball when growing up but began freestyling with friends at age 14. The following year, he decided to take his music to the next level, entering the studio and putting down raps inspired by Southern rappers like NBA Youngboy, Meek Mill, and Lil Wayne. He first went under the name YNR Choppa and released several tracks under that moniker. He soon switched over to using the name NLE Choppa, the NLE standing for his brand "No Love Entertainment." Along with other teenage rapper friends, he posted several videos, some gaining traction regionally. It was his January 2019 single, "Shotta Flow," that broke through worldwide, with an exciting and boisterous video accumulating tens of millions of views in a matter of months.

From there, major-label interest began, but Choppa turned all offers down, keeping ownership of his songs. He spent most of 2019 releasing new singles, including installments like "I Don't Need No Help," "Shotta Flow 2," "Shotta Flow 3," and "Camelot." These culminated in his debut EP, Cottonwood, which arrived in November that year. In August 2020, now locked into a deal with Warner, NLE Choppa released his first proper studio album, Top Shotta. The record featured guest spots from Mulatto, Lil Baby, Roddy Ricch, and Chief Keef and immediately broke into Billboard charts. Just months later, he released his next project, From Dark to Light. The mixtape included material recorded prior to the release of Top Shotta as well as songs recorded weeks before the album's release. Th newer material focused on newfound themes of spirituality and enlightenment, shifting gears considerably from the violence and struggle of previous albums. From Dark to Light featured cameos from Big Sean and Ink and debuted in Billboard's top 200 charts at number 115.