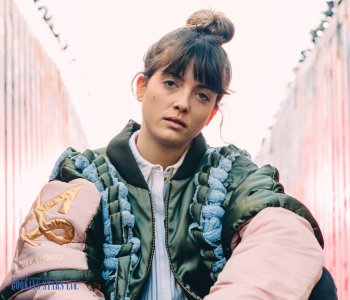 Tel Aviv producer and singer/songwriter Noga Erez makes electronic pop experimental that pairs bold sonics with astute social commentary. On her 2017 debut album Off the Radar, she delved into hypocrisy, paranoia, and privilege over propulsive tracks that recalled M.I.A. and Flying Lotus. She widened her approach on 2021's Kids, balancing her uncompromising worldview with a more personal viewpoint.

Born a year before the Gulf War started, Erez grew up taking piano and guitar lessons and ultimately studied composition at the Jerusalem Academy of Music and Dance. When she was 18, she served as a military musician in the Israeli Defense Forces; when her conscription was over, she played with the indie-folk group the Secret Sea and formed a jazz trio. However, Erez realized she wanted to make electronic-based music, and in 2012 she she began working with her collaborator and life partner, producer Ori Rousso. Together, they developed an atmospheric, beat-driven sound that Erez used as the backdrop for her viewpoints on some of the thorniest issues of the early 21st century. In 2016, Erez performed at the Rio Olympics as part of an official Israeli music showcase and signed to the Berlin label City Slang. That November, the label issued Erez's debut single, "Dance While You Shoot," which explored the guilt of living a safe life near war-torn areas. Early in 2017, "Pity," a song inspired by the alleged gang rape of a woman in a Tel Aviv nightclub, and "Toy," an examination of entitlement and privilege, arrived. All three singles appeared on Erez's full-length debut, Off the Radar, which was released that June.

Over the next couple of years, she issued more singles, including 2018's "Bad Habits" and 2019's "Chin Chin." By 2020, Erez and Rousso were hard at work on her second album, and released tracks such as "Views" and "You So Done" in anticipation of the full-length's release. Appearing in March 2021, Kids paired Erez's vivid productions with songwriting that took a more intimate perspective on the topics she examined on her debut.