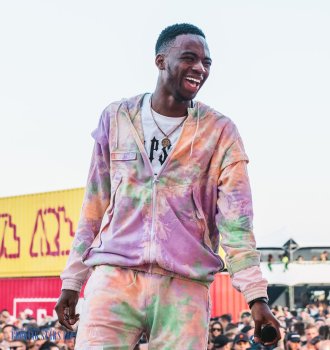 NOT3S’s real name is Lukman Odunaike. He was born on 17 April 1998 in London. So far, not much information is available about Lukman’s childhood and youth. Perhaps, the artist is planning to reveal more information in further interviews. He grew up in London. Since childhood, the musician was interested in acting. However, he later changed his preferences. Lukman primarily focused on his music career and began creating lyrics back in high school.

In 2016, Lukman started searching for a label to work with. A year later, he recorded his first song “Naughty”. The single didn’t become a part of any album. It was created together with 23 Unofficial. Even though the song didn’t make it into any popular charts, it helped NOT3S make first steps toward success.

By the end of 2017, the rapper had sufficient material to record an album. He decided to create a mixtape, Take Not3s. The album turned out to be surprisingly successful. It reached the 43rd spot of UK Albums Chart. At the time of the release, the artist was just 19 years old. It was his first official work. Among hits featured in the album were, “Addison Lee (Peng Ting Called Madison)", which reached the 15th spot of UK R&B Singles and Albums Charts and 57th position of UK Singles Chart, "Aladdin", appearing on the 15th and 61st spots of the mentioned charts, "My Lover" (recorded with Mabel), which reached 15th and 41st spot accordingly, "99 + 1" (recorded with Mostack), which climbed to the 82nd spot of the UK Singles Chart. The single “My Lover” earned a platinum certification in the UK. Many fans tried to book NOT3S for their events, and the artist often agreed.

In 2017, the singer spent the majority of his time working on other artists’ hits. He collaborated with Juls Kojo Funds and Eugy to create "Bad", worked with Lotto Boyz and Chip to record "No Don" (Remix), assisted D-Block Europe and Young Adz with "Trophy" (Remix), and helped MoStack record "Celebration". The artist worked with ADP, Jeremih, and Yungen on "No Good For Me" and helped Sneakbo with “Nah”. All the above singles were non-album. The first song appeared on the 13th spot of UK R&B Singles and Albums Charts and came in 29th on UK Singles Chart.

In July 2018, the artist recorded his second mixtape. NOT3S called it Take Not3s II. Again, the musician worked with Relentless Records. Compared to the first mixtape, this one turned out to be even more successful. It climbed to the 16th spot of the UK Albums Chart. The mixtape featured such songs as "Sit Back Down" (created with Maleek Berry), "M3 Not You", "Palm Wine", and "Just Fine". The first one reached the 61st spot of the UK Singles Chart. The last one settled on the 60th position of the same chart.

The same year, the singer recorded “To The Max” with the assistance of Nana Rogues and Wizkid.

In 2018, the musician spent a lot of time working with other artists. Together with Mabel, he recorded “Fine Line”, which appeared on the 11th spot of the UK Singles Chart and on the 4th position of UK R&B Singles and Albums Charts. It was featured in Mabel’s album, Ivy to Roses.