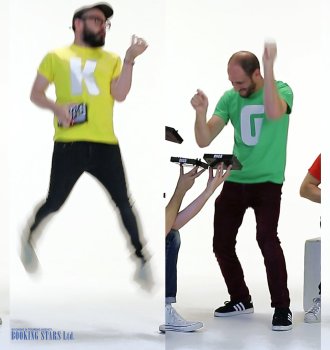 The rock band OK Go was formed in Illinois, in 1998. They are now based in California. The current lineup includes Damian Kulash, Tim Nordwind, DanKonopka, and Andy Ross. OK Go is particularly famous for such songs as “Get Over It”, “Here It Goes Again”, and “I Won’t Let You Down”. The band holds numerous awards, including a Grammy and 2 MTV Video Music Awards.

Damian Kulash met Tim Nordwind at a camp when they were just 11 years old. Damien was interested in graphic design and Tim’s hobby was music. The name of the band came from the boys’ art teacher, who used to say “OK….Go!”. By the time the boys finished college, they formed a band.

The band members say that they were mostly influenced by such musicians and bands as Pizies, The Cars, T.Rex, Queen, The Zombies, and Shudder to Think. Besides playing appealing music, the band persistently worked on its image. They attracted attention thanks to their ties, blazers, classic pants, and a number of accessories, such as brooches.

In 2002, OK Go released their first studio album OK Go. It reached the 107th spot on Billboard 200 and the 95th spot on the UK Albums Chart.

In 2005, the band released their second album Oh No, which was much more successful than their first work. It reached the 69th spot on Billboard 200. The LP was recorded in Sweden. The single from the album “A Million Ways” didn’t make it into Billboard Hot 100 but became a hit in the UK, where it reached the 43rd spot on the singles chart.

In 2007 and 2008, the band released two EPs Master the Treadmill with OK Go and You’re Not Alone. Both of them were successful. The band gave a few concerts in support of the EP.

In 2010, the band released their third studio album Of The Blue Colour In The Sky. The LP reached the 40th spot on Billboard 200 and the 7th spot on the Billboard Rock Chart.

In 2014, Go Ok changed the label to Paracadute and recorded their last studio album to date Hungry Ghosts. The LP reached the 74th spot on Billboard 200 and the 19th spot on the Billboard Rock Chart.

OK Go is available for booking. Book a celebrity for your special event online!