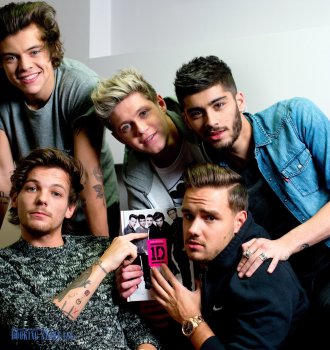 One Direction was formed in 2010 in London. Its members are Niall Horan, Liam Payne, Harry Styles, and Louis Tomlinson. The fifth original band member Zayn Malik left in 2015 to start a solo career.

The creation of the band was unusual and unexpected. In 2010, all the above-mentioned artists came to the show The X-Factor without knowing each other. They wanted to try to win the seventh season of the show as solo singers. However, the judges decided to make them all part of one group. The young men immediately climbed to a new level. For two weeks, the artists have been working together and learning how to perform as a band. Styles came up with the name One Direction, which later became the official title of the group. The band debuted with the song “Torn”. Later in the show, they performed the songs by such famous artists as Kim Wilde, Pink, Snow Patrol, The Beatles, Coldplay, Kelly Clarkson, Elton John, Rihanna, and others.

Simon Cowell was the band’s mentor throughout the show and gave them numerous useful advice. His guidance helped the group to come in third. After the finals, the band signed a contract with their mentor’s label Syco Records.

In 2011, One Direction started working on their debut studio album. However, they had to take a break and go on the UK concert tour. They performed with other bands and artists, who were on The X Factor. More than half a million people attended the concerts.

In September 2011, the young men recorded their first official single “What Makes You Beautiful”. It topped the UK charts. The music video for the song was viewed more than 20 million times on YouTube. The next two singles “Gotta Be You” and “One Thing” also became hits in the UK and other countries. By that time, the musicians already had many fans. Organizers tried hard to book One Direction for private events.

In November 2012, the band released its first studio LP, Up All Night. It featured all the above-mentioned hits. To support the album, the group went on a tour with the same name. The LP climbed the high spots of charts in 16 countries and sold over 4.5 million copies worldwide. Shortly, the band members released to autobiographies “Dare to Dream” and “Forever Young”.

In May 2012, the group started working on their second studio album, Take Me Home. It was officially released in November. The LP was highly commercially successful and sold over 4.4 million copies. The songs from the album have been topping the UK and New Zealand charts for many weeks.

In February 2012, the musicians went on a tour to the UK, Australia, and North America. The same year, they released the 3rd LP, Midnight Memories. The album was commercially successful. It topped Billboard 200 and earned over a dozen platinum certifications worldwide. The same year, the fans saw a documentary about the band called One Direction: This Is Us.

In 2014, One Direction presented the next LP, Four. It was just as successful as the previous albums.

In 2015, Zayn Malik left the band to pursue a solo career. The group didn’t find a replacement and worked without him. The same year, they presented Made in the A.M.  The album was slightly less popular than the previous ones but still climbed to high spots on the charts.

In 2016, the band members declared a hiatus, which was supposed to last 18 months. However, the fans are still waiting for the reunion.