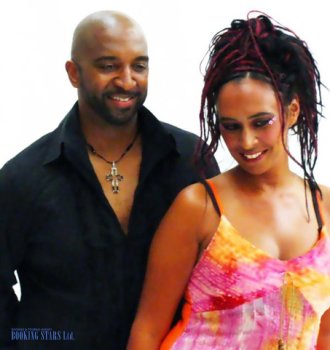 Esther de Bijl aka E-Starr has her roots on the beautiful island of Bali.
She is a member of Ottawan from the start. Coming from a very musical family she always knew she wanted to become a singer and perform on stage.
Besides Ottawan, Esther also performed with her brother and sisters in well known bands like 'Sisters of Soul' and 'Solid Sisters', she did a lot of background singing for various well known artists, and is a skilled songwriter who used to write songs for her bands and her solo project E-Starr.

C. Robert Walker was born in the USA, he was a member of the American vocal group 'Men with style' before he joined Ottawan. Robert is a trained multi instrumentalist and song writer, he worked with 'Gard du Nord' Junior Jack and many more.