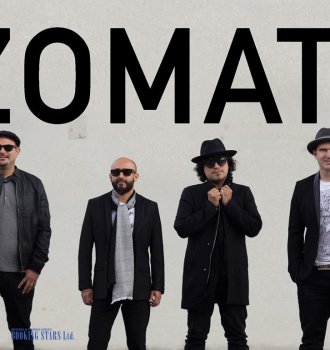 The first members of Ozomatli band met in Los Angeles. They didn’t have any plans to create a group. In fact, they were trying to arrange a worker’s union headquarters. The project failed but left them with a month’s use of an abandoned building. The musicians turned the empty house into a cultural center and then decided to form a band called Ozomatli. The name Ozomatli has Aztec roots. In one of the Aztec languages (Nahuatl), it signifies the dance god, fire, and music.

The band’s lineup changed several times. After it changed in 1997, the group consisted of 12 musicians. The band started performing in local bars and clubs. Once they got a chance to play their music at a talk show Vibe!.

In 1998, the band signed a contract with Almo Sounds label and released their debut album Ozomatli. The LP immediately became very successful. It made it to the 7th spot on Billboard’s Latin Albums Chart, where it stayed for over 70 weeks. Thanks to the quick success, the band got an invitation to join a famous guitar player Carlos Santana on his 1999 tour.

In 2001, Ozomatli released their second album, Embrace the Chaos. This LP was even more successful than their previous work, making it to the first spot of Billboard Latin Albums Chart. It also brought the musicians their first Grammy Award for The Best Latin Rock/Alternative Album.

In 2003, the band recorded an EP, Coming Up, which included six songs. The rapper Kanetic Source helped recorded a famous single “Cumbia De Los Muertos”. The band was becoming more and more popular. It was hard to book Ozomatli for any event. The group stopped performing in the local Los Angeles clubs and started working on new albums.

In 2004, the group recorded their third studio album Street Signs. The LP brought the band two Grammy Awards for The Best Alternative Album and The Best Latin Rock/Alternative Album. The album also received substantial approval from the critics.

In 2007, Ozomatli recorded a new album, Don’t Mess With the Dragon. It included such singles as “After Party”, “When I Close My Eyes”, and “La Segunda Mano”. Even though the LP was very successful, the band went through new lineup changes. DJ Spinobi and MC Jabu bid farewell to the group. Other members said that they parted amicably.

In 2010, the band released an LP Fire Away, which was recorded by just six members. Two years later, they created a children’s LP Ozomatli Presents Ozokidz. Ozomatli’s last album to date is Non-Stop: Mexico to Jamaica (2017). The band continues recording new music, going on tours, and performing live.