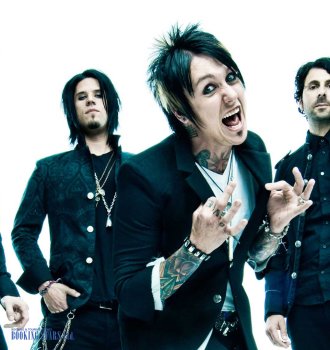 The rock band Papa Roach was formed in 1993, in California. The current lineup includes Jacoby Shaddix, Jerry Horton, Tobin Esperance, and Tony Palermo. They are particularly famous for such hits as ‘Last Resort”, “She Loves Me Not”, and “Scars. The band was nominated for two Grammy Awards.

At first, Papa Roach performed at cafes, pizzerias, and local clubs. Soon they became celebrities at such venues as The Cactus Club in San Jose and the Cattle Club in Sacramento. Thanks to the impressive charm and glamour of the band members, they managed to conquer the younger audience. Teenagers and children frequented Papa Roach’s shows.

Such bands as Snot, Fat, Himan Waste Project, and Fu Manchu performed as the opening act for Papa Roach’s concerts.

In 1996, the band members decided to change their approach, They replaced their drummer Will James with Tobin Esperance, who was just 16 at the time. The band hired a manager Bret Fair, who helped them organize concerts and create an advertising campaign. Papa Roach was ready to record their first studio album.

In 1997, Papa Roach recorded their first LP Old Friends From Young Years. It included 13 songs, such as “Orange Drive” and “Liquid Diet”. These songs appeared on various Californian radio stations. They topped the Cal-State Sacramento most requested band list for 5 weeks.

The growing popularity of Papa Roach was impressive. Many promoting companies were hiring the band for big shows. For example, in 1997, the band performed at a huge show in Sacramento in support of Suicidal Tendencies.

In 200, Papa Roach released their second LP Infest, which was a huge hit. The album reached the fifth spot on Billboard 200 and received platinum certifications in different countries. The next two albums Lovehatetragedy (2002) and Getting Away with Murder (2004) were big hits. Then the band’s immense popularity started to slowly wane but they were still getting high spots on the music charts worldwide.