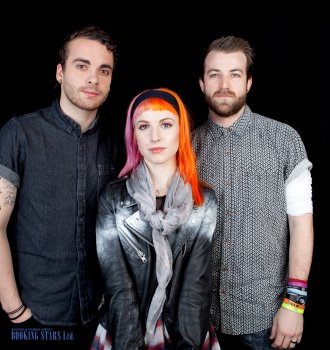 The rock band Paramore was formed in Tennessee, in 2004. The current lineup includes Hayley Williams, Zac Farro, and Taylor York. The band is particularly famous for such hits as “Misery Business”, “Decode”, and “Ignorance”. They hold numerous awards, including 11 Teen Choice and 1 Grammy.

Paramore is an American rock band playing mostly punk rock music. Brothers Zac and Josh Farro formed it in Franklin, Tennessee. Josh eventually left the band in 2010. When the brothers decided to create a group, they knew they were lacking a talented vocalist. After a long search, they found 16-year-old Hayley Williams, who was just starting to take music lessons. Farro brothers and Hayley started rehearsing and preparing for their first big concert. They were joined by Jeremy Davis (bass guitar) and Jason Bynum (rhythm guitar/ backing vocals). They quickly came up with the band’s name.

As soon as the band was fully formed, they started giving concerts and writing their own songs, which were later included in their first LP. In 2005, the band signed a deal with Fueled by Ramen Records and released their first studio album All We Know Is Falling. The LP reached the 51st spot on the UK Albums Chart but failed to make it into Billboard 200. After the release of the LP, Davis decided to leave the band. The remaining four members dedicated him their new song “All We Know”. He was replaced by John Hembry, who stayed with the band less than a year, Davis decided to come back.

In 2009, the band released their third album Brand New Eyes, which was a big success, topping UK Albums Chart and reaching the 2nd spot on Billboard 200. The album was rated platinum by RIAA, ARIA, and BPI.

Their last album to date After Laughter (2017) was also very successful. The band continues to work on new music and performs live.

How much does it cost to book Paramore:
Price inquiry
Paramore booking agent:
Contact agent
Paramore Contacts:
Send Paramore a message
« previous next »