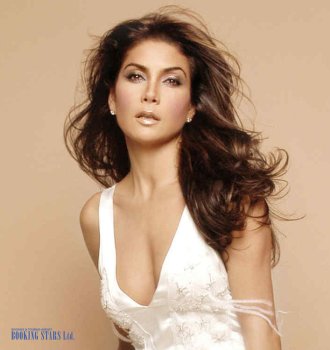 Patricia Manterola (full name Bertha Patricia Manterola Carrión) was born on 23 April 1972 in Mexico City. Ever since she was a child, Patricia was very interested in the entertainment industry. She attended several schools and at each, she demonstrated her talent by participating in show and plays. While in school, Manterola learned how to sing and dance. Patricia debuted on the big screen when she was just 9 years old. She performed in a musical comedy "Anita la Huerfanita." The girls also sang in the Miguel Angel Institute choir.

In 1989, Manterola went to an audition to become part of the famous Mexican teenage band Timbiriche, but the producer offered her a job in his new project Garibaldi.

In 1992, Patricia landed a role in the movie Donde quedo la Bolita? She studied for the role with the help of a famous Mexican actor Sergio Jimenez. The role brought her talent to life and identified her as an aspiring young actress with a bright future.

However, Patricia wasn’t planning to devote her life solely to acting. She continued to perform with Garibaldi. Together they gave concerts in Mexico, USA, South America, Europe, and Africa. After working with the band for 5 years, she decided to pursue a solo career.

In 1994, during one of the Acapulco concerts, Patricia announced her leave. The same year she signed a contract with Fonovisa and recorded her first solo album Hambre de Amor. The LP was produced by Gian Pietro Felisatti. The album was moderately successful. The three singles "Quiero", "Lo Juro," and "Ni Caso" made their way to the local Mexican radio stations.

The next year was very busy for Patricia. She landed a leading role in telenovela Acapulco, cuerpo y alma The series was popular in many countries and for several months they earned the highest ratings in Mexico. At the same time, Patricia was giving concerts in Mexico and USA. She was dubbed the “Queen of 1995” at the Vina Del Mar Festival. She also earned the Discovery of the Year award from TV y Novelas magazine. The young woman became very popular. Those, who wanted to book Patricia Manterola for any event, had to work hard and wait a long time.

As soon as Acapulco, cuerpo y alma was over, Manterola started working on her new album together with Felisatti. Nina Bonita (1996) sold over 10,000 copies. The leading single “Nina Bonita” topped Mexican Singles Charts.

Patricia devoted 1997 to filming TV series Gente Bien, where she had the starring role. Upon the completion of the series, Manterola went to the USA to improve her English and become a Hollywood actress.

A year later, she returned to Mexico to release Quiero Más and went back to the USA to conquer Hollywood. In 2000, she landed a big role in Hazzard in Hollywood. She went on to pursue her acting career in Hollywood and became rather famous. Meanwhile, Patricia continued working on her Mexican music career.

In 2002, she released Que El Ritmo No Pare, which was a big hit.  Manterola recorded three more albums. However, due to her success in Hollywood, the breaks between the releases were getting bigger and bigger. The latest album to date Ya Terminé was released in 2010.

Patricia Manterola continues working on her music and acting career. She is also a model and a fashion designer.