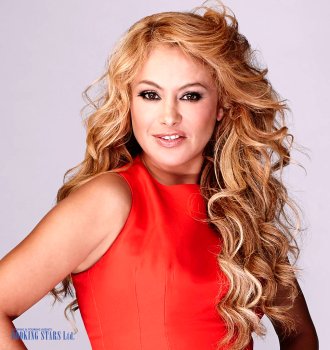 Paulina was born on June 17th, 1971 in Mexico City. Her mom, Susanna Dosamantes was a TV actress and her father, Enrique Rubio, was a lawayer. Ever since the young age, the girl loved the stage since she spent a lot of time with her mom at the shoots.

In 1982, Paulina was accepted to the band Timbiriche. She spent almlost 10 years with the group. Together they recorded 10 albums. Paulina gained valuable performance experience. Every day she kept dreaming about a solo career and popularity as a singer.

In 1991, Paulina decided to leave Timbiriche and start a solo career. Her debut album La Chica Dorada (The Golden Girl) was released in Spain with the help of Miguel Bose. The LP was extremely popykar. In just a few days, it became platinum. By 1993, the album sold over 300,000 copies and earned a platinum certification. In Latin America, everyone called Paulina La Chica Dorada. Before the end of the 1990’s, the young woman releaed three more albums: 24 Kilates, El Tiempo Es Oro, Planeta Paulina. However, none of them made it into the popular charts.

While recording new albums, Paulina pursues an acting career. After her stellar debut in a soap opera Pasin y Poder (Passion and Power), she is offered several secondary roles in telenovelas. Soon, she snagged leading roles in the movie Besame en la Boca (Kiss on The Mouth) and in the soap opera Pobre nija rica (Poor Rich Girl).

In 2000, Paulina signed a contract with Universal Music Group, which brought her international popularity. Her album Paulina (2001) topped the charts and received 6 platinum certifications in Mexico. In Spain, the album went platinum 8 times and in USA – 6 times. The LP was released in UK, Italy, Turkey, Brazil, and Portugal. It sold over five million copies worldwide.

In 2002, the singer released her new album Border Girl, which was certified golden in Japan, USA, and Canada mainly due to the popular single “Don’t Say Goodbye”.

In 2011, Paulina released her last studio album to date called Brava! It reached the fifth spot on the Mexican charts and third and second spots on Billboard US Latin and US Latin Pop Chart accordingly.

Throughout her career, Paulina released 10 studio albums, all of which were rather popular.

In 2013, the singer became one of the judges on the American version of X Factor. Due to a very busy schedule it became hard to book Paulina for any music events.

In 2016, Paulina won the c Super Estrella and Billboard Awards competition. Right now Paulina is working on a new album. She is also an avid business woman, who works with MAC cosmetics on a lipstick line.