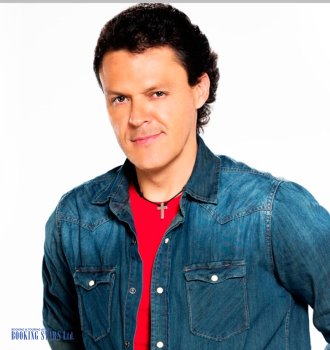 Pedro Fernandez (real name José Martin Cuevas Cobos) was born 28 September 1969 in Guadalajara, Mexico. The talented boy recorded his first studio album when he was just nine years old. At first, Fernandez became a child star and then turned into a popular mature singer. The artist’s pseudonym consists of the names of his favorite singers Pedro Infante and Vicente Fernandez.

Since childhood, Pedro loved mariachi and ranchera music. Being a hyperactive kid, by the time he turned three, Fernandez learned how to channel his energy into singing. He easily copied the songs he heard on the radio. Pedro’s idol Vicente Fernandez really liked the way the boy sang his song “Las carreras de caballos” and helped him get a contract with a recording label.

After some time, Pedro decided to start recording romantic ballads, which brought him immense popularity in other Latin American countries and the USA. For a time, he forgot about his love to ranchera and mariachi. Fernandez recorded several pop songs, such as "El Perdedor," "Maniquí," and "Coqueta."

Even though romantic ballads brought Pedro a lot of commercial success and popularity, the singer decided to go back to his Mexican roots and recorded an interpretation of the famous Jose Alfredo Jimenez’s song “Amenecí en tus brazos.” Fernandez mixed traditional Mexican music and pop-ballads to get amazingly successful songs that earned golden and platinum certifications in the USA, Chile, and Venezuela.

In 1994, the album Mi forma de sentir sold over a million copies. Throughout his 30-year career, Pedro sold more than 30 million albums. He is considered one of the most popular Mexican artists of the 20th century.

When in 2001 Pope John Paul II visited Mexico, it was Pedro and his band of mariachi musicians, who got an honor to sing him a farewell song. The same year, Pedro received a Latin Grammy for the album De Corazón. It was becoming impossible to book Pedro Fernandez for any event in Mexico and abroad.

In 2008, in Spain, Fernandez recorded a famous album Dime Mi Amor. The single from the LP “Sana Mi Herida”, which he sang together with David Bisbal conquered Mexican charts.