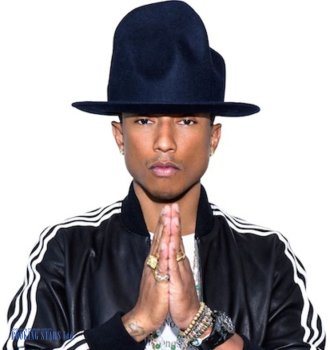 Pharrell Williams was born into a large family: in addition to him, his parents raised four more sons - Faroy, Kato, Solomon and David.

Since childhood, Farrell was interested in music, was able to play keyboards and drums and sing (his register is falsetto). Williams managed to show his talent in a children's camp, where he left for the summer after the seventh grade. There he met Hugo Chad, who played the saxophone perfectly and was a conductor at his school. So the R'n'B-group The Neptunes was born, which later joined the guys' friends - Shay Haley and Mike Etheridge.

Once they all took part in a music competition organized at the school where Farrell studied. It was there that they were noticed by the eminent producer Teddy Riley (his studio was located next to the school) and offered to sign the first contract in their life.

The Neptunes almost never released their own singles, but they recorded many hits for already promoted artists: I’m a Slave 4 U for Britney Spears, Frontin for Jay Z, Harder, Better, Faster, Stronger for Daft Punk. Their works were highly appreciated not only by their colleagues in the stellar shop, but also by critics: the musicians have repeatedly become producers of the year in the categories of the Grammy Awards and Billboard Awards.

In parallel with these projects, Farrell, Shaye and Hugo form the N.E.R.D. (the word Nerd ("nerd"), converted into an acronym for No One Really Dies). On two albums recorded for N.E.R.D., the guys experimented a lot with live music and rock, which was warmly received by fans and critics: both albums went gold, and the guys successfully toured America. However, after five years, the group ceased to exist due to disagreements with the record label.

Alone, Farrell has also enjoyed working with many famous artists. His music box includes hits Boys for Britney Spears, Hollaback Girl for Gwen Stefani, Madonna's Give It to Me (the video for this song is one of the few clips of stars produced by him, in which Williams himself appeared), Justin Timberlake's Justified, Drop It Like It's Hot Snoop Dogg.

In 2005, Farrell, who has repeatedly received flattering compliments for his style (his huge hats, short shorts and plaid shirts have long been his hallmark), launched the Billionaire Boys Club menswear line. At the same time, sales of the Ice Cream shoe line began. In the wake of the success of his collections, the performer opened his own textile production Bionic Yarn. And in 2008, the musician released jewelry jointly with the House of Louis Vuitton.

In 2013, another bestseller was released - the composition Get Lucky, recorded together with the electronic duo Daft Punk. In the same year, the singer takes another height, recording the first-ever 24-hour video for his song Happy (this hit also has a more traditional, 4-minute version). The single Happy was nominated for an Oscar! Later, Farrell released his first fragrance, Girl, named after his second album, became the face of the Uniqlo brand and took the chair of one of the star judges of the American show The Voice.

Farrell is also involved in charity work: he founded the From One Hand to Another Foundation to help children from disadvantaged American families.

On October 12, 2013, Pharrell Williams married model Helen Lasichan, whom he dated for 5 years and raised his son Rocket. The rocket is named after Elton John's song Rocket Man. Farrell himself dedicated to the boy the composition Rocket's Main, which was included in the soundtrack of the cartoon "Despicable Me".

To book Pharrell Williams, you can call us right now! Do not miss a chance to listen to your favorite hits at your event!