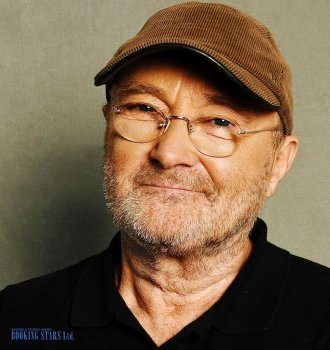 Phil Collins was born on 30 January 1951 in London. His head-spinning career began when he was just five years old. Phil’s parents gave him a toy drum set, which he immediately started using to copy music from TV commercials. The hobby turned into a very successful career.

In 1969, the young musician got an offer from the band Flaming Youth. He accepted it and became a professional drummer. A year later, the band fell apart, and Phil started looking for a new job. Next year he saw an advertisement from the band Genesis, which was searching for a drummer. When Phil came to the audition, he was pleasantly surprised by the ambience. The band’s studio was located in a beautiful place with a great scenery, a pool, and a drum set in the tree shadows. After showing his talent, the musician was immediately accepted. Genesis paid him twice as much money as Flaming Youth.

Phil didn’t just play the drums, he tried himself as the back vocalist. In 1971, the band recorded an LP, Nursery Cryme, which featured one of the songs performed by Phil. In 1975, the band founder left. The group started looking for the new vocalist. After holding hundreds of auditions, they finally decided to offer Phil the position. He was very unsure but eventually accepted the offer. The next 20 years were very successful for the band. It earned international recognition. Phil didn’t just play the drums and sing, he wrong lyrics and music as well. While working with Genesis, Phil performed with the jazz project Brand X.

In the early 1980’s the musician decided to pursue a solo career. It turned out to be much more successful than group work, which happens rarely. Phil’s first solo album Face Value sold more copies than any of the Genesis’ LPs. The song “In the Air Tonight” became a big hit and Collins’ calling card. While still working with Genesis, the musician recorded several successful solo LPs. In 1985, he was invited to play with Led Zeppelin at a music festival.

In 1990’s, Phil finally decided to leave Genesis. In order not to let his friends down, he agreed to stay for the goodbye tour. Collins also helped the band record one of its most successful albums, “We Can’t Dance (1991).

The majority of Collins’ songs are about love. These are beautiful and harmonic records. However, he also touches upon other subjects, such as relationships between parents and children, moral values, homeless people, wars, and other important situations. The musician also tried himself as an actor and appeared in several TV series, animated movies, and films, where he had secondary roles.

In the spring of 2011, Collins announced the end of his career. He said that he wanted to spend as much time as possible with his children. The media discussed other reasons, such as hearing loss. However, Phil refuted these rumors.

Five years later, in the fall of 2016, Collins decided to return to the music world. The next year he gave nine concerts in London, Cologne, and Paris as part of the tour with a telling name Not Dead Yet Tour.

To date, Phil sold 150 million copies of his albums. He earned a variety of awards including seven Grammies and one Academy Award.

Collins continues working on his music career and gives concerts all over the world.