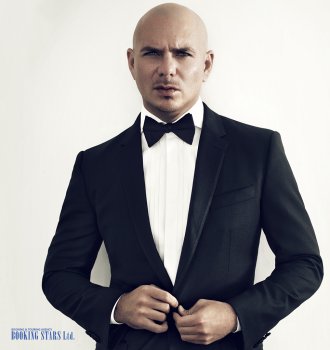 Pitbull’s real name is Armando Christian Pérez. He was born on 15 January 1981 in Miami. After his parents divorced, Armando lived with his mother. He enjoyed music since childhood and was influenced by such celebrities as Celia Cruz and Willy Chirino. Armando has a Cuban heritage.

The singer has a pale skin and blue eyes, which are at odds with the standard rapper’s appearance. However, it didn’t stop Perez from becoming a hip-hop artist. The young man attended South Miami Senior High School and Miami Coral Park High School. As a teenager, he focused on becoming a musician and started writing songs. At one time, he decided to earn some money by dealing drugs. Perez’s mother found out and kicked him out of the house.

The musician’s career got a jump-start when he met a rapper Lil Jon. Pitbull helped Jon record a studio album. Then he came up with a solo single “Oye”, which was used as a soundtrack for the 2003 movie 2 Fast 2 Furious. In 2000, the artist participated in Eminem’s and 50 Cent’s concert tours.

Between 2001 and 2003, the rapper was waiting for a contract with a label. He took part in different projects and recorded a couple of unsuccessful mixtapes. In 2004, Pitbull finally signed a contract with Luke Records and released his debut studio album, M.I.A.M.I. The single “Culo” made the album very popular. It reached the 32nd spot on Billboard Hot 100 and 11th position on Hot Rap Tracks. Other songs, "That's Nasty", "Dammit Man”, "Bojangles", "Back Up", "Ay Chico (Lengua Afuera)", "Toma", and "Be Quiet" were also successful. After the release, many fans tried to book Pitbull for their events.

In 2005, Pitbul became a businessman. Together with Sean Combs (P. Diddy), he founded a branch of Bad Boy Records, Bad Boy Latino. The label focused on working with artists, who performed Latino hip-hop, soul, and pop music.

In 2006, the artist joined Terror Squad band and recorded two singles “Born-N-Raised” and ”Holla at Me”. The same year, Pitbull released his second LP, El Mariel, which he dedicated to his father. The LP became very popular. It reached the 17th spot on Billboard 200 and came in second on Top Rap Albums. It featured such popular songs as “Bojangles”, “Ay Chico (Lengua Afuera)”, “Fuego,” and “Dime (Remix)”.

Pitbull’s third studio album, The Boatlift, came out in November 2007. The critics approved of the gangsta rap direction, the artist’s songs were taking. The LP reached the 50th spot on Billboard 200 and settled on the 5th position of Top Rap Albums.

The singer gave his first concert in 2007 and conquered the hearts of many new fans.

In 2009, the rapper recorded his fourth studio album, Rebelution. It climbed to the 8th spot of Billboard 200 and topped Top Rap Albums. It featured such platinum hits as "I Know You Want Me (Calle Ocho)", “Hotel Room Service" and "Shut It Down". Next year, Pitbull recorded a less popular album, Armando, which nevertheless earned good reviews from the critics.

In 2011 and 2012, the rapper presented Planet Pit and Global Warming accordingly. The former sold over 500,000 copies in the USA and earned platinum and gold statuses in different countries. It featured such great hits as “Back In Time”, “Don’t Stop The Party”, and “Feel This Moment”.

In 2014, Pitbull presented Globalization, which featured such popular songs "Fun", "Time of Our Lives", "Drive You Crazy", "We Are One (Ole Ola)", and "Sexy Beaches". The LP climbed to the 18th spot of Billboard 200. The same year, Pitbull got a star at Hollywood Walk of Fame.

The next LP appeared in 2015. Dale was well received by the critics and settled on the 97th spot of Billboard 200.

In 2017, the rapper released another album, Climate Change, which featured such popular songs as "We Are Strong", "Messin' Around", and "Only Ones to Know".

Today, Pitbull is working on his next album.