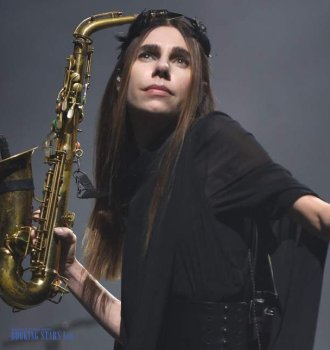 PJ Harvey (full name Polly Jean Harvey) was born in 1969 in Bridport, England. Her parents loved music and often arranged parties, during which the girl got a chance to listen to different genres and fall in love with jazz, blues, and rock.

PJ attended high school in the neighboring town, where she learned how to play the saxophone and became a part of the local group Bologna. Later, Harvey was introduced to a folk singer Steve Knightly, who taught her how to play the guitar. When the aspiring artist was just 8 years old, she got a chance to perform with a duo called Polekats. At about the same time, Polly started writing her first songs.

In 1988, Harvey joined a Bristol band Automatic Dlamini. She played the saxophone and the guitar. The young woman performed with the group during its tours. Together, they gave concerts all over Europe. In 1989 and 1990, the band was recording its second LP, Here Catch, Shouted His Father. Harvey participated in the process. Unfortunately, the album was never released. Polly remembers her time with Automatic Dlamini with pleasure. She believes that working with them gave her a priceless experience of performing in front of a big audience and helped hone the guitar playing skills.

In January 1991, Harvey decided to form her own band. After spending some time trying to find a suitable name, she settled for the shortened version of her own – PJ Harvey. Other members of the group were Rob Ellis and Ian Oliver. Both used to be part of Automatic Dlamini. Later, Oliver returned to Automatic Dlamini and was replaced by Steve Vaughan. The group arranged its first performance in the local venue, Charmouth Village Hall. It turned into a big failure. The listeners left before the concert was over.

In June 1991, Polly decided to continue her studies of music and sculpture and moved to London. However, she didn’t leave the band. The group recorded several demo tapes and sent them to various labels. In October, the artists presented a debut single “Dress”, which became a single of the week according to Melody Maker. The song earned approval from the critics.

In February 1992, the band released its second single, "Sheela-Na-Gig", which was a formidable success. The song reached the 9th spot on Modern Rock Tracks Chart. In March, the group presented its first LP, Dry, which climbed to the 11th spot of the UK Albums Chart and earned a silver status in the UK.

In December 1992, the band went to the USA to work on its second album. In April 1992, PJ Harvey released a new single "50ft Queenie", which settled on the 27th position of the UK Singles Chart. In May, the artist presented a new LP, Rid of Me. It came in third on the UK Albums Chart and climbed to the 10th position of Billboard Heatseekers Albums Chart.

To support the album, the band went to tour the USA. During the tour, the artists started having problems within the group, which turned out to be unsolvable. The group fell apart in September 1993.

For a year after the disbanding, no one has heard about Polly. She used the money earned while working with the group to buy a village house and spent a year recording new songs. In the fall of 1994, with the support of John Parish, the singer presented her first solo LP, To Bring You My Love. It came out in February 1995 and earned positive reviews from the critics. The album became more commercially successful than any of the LPs recorded by the group. The Rolling Stones magazine called it the album of the year and Polly – the artist of the year. Many fans tried to book PJ Harvey for their private events.

In September 1996, Polly Harvey and John Parish recorded a joint album, Dance Hall at Louse Point. Even though it got high scores from the fans, the LP was less commercially successful than Harvey’s previous album. In September 1998, Polly presented a new LP, Is This Desire?, in which she switched from rock guitar to keyboards.

In February 2011, PJ Harvey released her new album, Let England Shake. It sold more than 22,000 copies in the first week and reached the 8th spot on the UK Albums Chart. It brought PJ several prestigious awards and nominations. Her next LP, The Hope Six Demolition Project, appeared five years later and topped the UK Albums Chart.

In 2017 and 2018, Polly toured the world with her latest albums. She continues recording new songs and performing live.