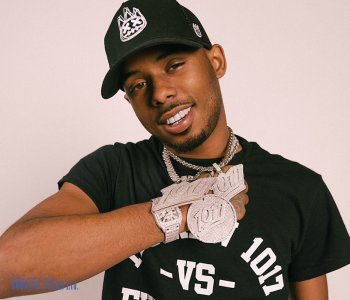 Pooh Shiesty followed in the footsteps of other Memphis rappers, bringing a sinister charm and imposing rap skills to songs of confrontation and intensity.

The rapper did serious numbers while he was still independent, racking up enough streams and views to be signed by Southern rap kingpin Gucci Mane to his major-label subsidiary 1017.

Shiesty released multiple charting tracks in anticipation of his proper full-length debut, Shiesty Season, which was slated for a February 2021 release.

Gucci Mane Presents: So Icy SummerPooh Shiesty was born Lontrell Williams and grew up in a musical household; his father was a rapper and label founder.

Pooh was interested in rapping early on and formed the Choppa Gang when he was still in high school, sharpening his rap skills by freestyling with friends.

After a short time living with his mother in Texas, he returned to Memphis, graduated school at age 18, and put all of his focus on music.

His first tracks under the Pooh Shiesty moniker surfaced online in 2018, and he broke through in 2019 with his track "Shiesty Summer," which accumulated millions in both streaming numbers and video views.

In 2020, Gucci Mane contacted Shiesty and quickly signed him on the promise shown in his independently released songs.

He was prominently featured on multiple tracks on the 2020 label showcase compilation Gucci Mane Presents: So Icy Summer, including his single "Main Slime," included on the comp in a remixed form featuring guest verses from Tay Keith and Moneybagg Yo.

Throughout 2020, Shiesty released several tracks that all streamed in the millions, including "Monday to Sunday" featuring Lil Durk and Big30, "Twerksum," and "Back in Blood," again featuring contributions from Lil Durk. He also showed up as a guest on tracks from many of his peers, adding verses to songs with Foogiano, Hotboii, SpotemGottem, and many others. Shiesty began 2021 with the release of new tracks "Guard Up" and "Make a Way," with plans to unveil his first full-length project, Shiesty Season, in February of that year.