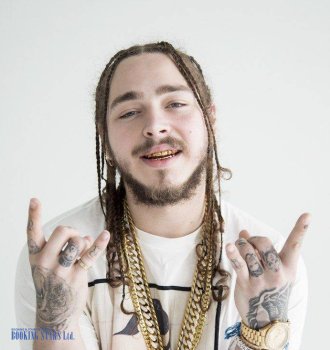 Austin Richard Post was born on 4 July 1995 in a small New York town. His father Rich Post used to be a DJ and managed to cultivate the love for music in his son. When Austin was a teenager, he came up with a stage name Post Malone, using an online rap singer name generator.

In 2011, the young man recorded his first mix called "Young and After Them Riches". In order to create and polish it, he used a free audio editor Audacity. Austin’s friends loved his first song. In Grapevine High School, Post’s classmates called him “Most Likely to Become Famous” and they were right.

In 2014, Post met Trocon “FKi 1st” Roberts and Steven "Sauce Lord Rich" Bolden from FKi production company. Roberts said that when he heard Malone sing, he immediately realized that the young man had a bright future ahead of him. FKi produced and recorded Austin’s track "White Iverson".

In February 2015, the single was uploaded to SoundCloud from Post Malone’s account. In just three weeks, the song collected over a million views. In July, Malone recorded a music video, which, from the moment it was released, collected more than 552 million views to date. The song received awards from Mac Miller and Wiz Khalifa. FKi made it into the top-5 of the Billboard list in 2014. A year later, XXL called it the hottest producing team in Atlanta.

Austin’s success caught the attention of several recording labels. In August 2015, he signed a contract with Republic Records to record an album. At about the same time, Post Malone performed at Kylie Jenner’s birthday party, where he met Kanye West. West liked Post’s work, which led to their collaboration for recording a single “Fade” for Kanye’s LP The Life of Pablo. A while later, Malone met Justin Bieber, who invited him to work as an opening act at his promotion tour. Later, Post Malone worked with many famous artists, including 50 Cent and Young Thug

In 2016, Malone released a new single "Go Flex" at Zane Lowe's Beats 1. In May, he recorded the mixtape August 26. A month later, he debuted on TV in the show Jimmy Kimmel Live!, on which he performed "Go Flex".

Malone’s debut LP Stoney was released in December 2016. Austin wasn’t fully satisfied with his work even though the single "Congratulations" was a big hit. It reached the eighth spot on Billboard Hot 100. Other songs from the album also made it into the top-100. By 2017, the LP was certified platinum twice.

In February 2017, Malone announced working on the next album, Beerbongs & Bentleys. The released is scheduled for 2018.

In September 2017, Austin released the leading single from the upcoming LP "Rockstar". The song topped Billboard Hit 100 and stayed there for several weeks.