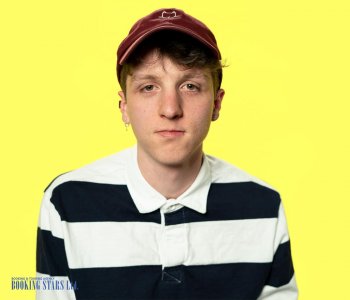 Powfu - A young guy from Canada works under the pseudonym Powfu, who composes beautiful and melodic love ballads.

This young man was born into an ordinary Canadian family and was brought up in an atmosphere of love and support. As a child, he had no particular hobbies, but as a teenager he became interested in hip-hop music. He dressed appropriately, attended various parties and companies, spent a lot of time on the street. Like many members of this movement, he tried to compose his own songs. However, he was not sure of the attractiveness and uniqueness of his work, so he wrote many lyrics “on the table”.

His further studies in music were decided by chance. One day Seth heard a certain beat on a music venue. He liked the melody so much that he wrote the lyrics to it. He showed the result of his creativity to a friend. This very friend convinced him that the song was good, and that it must be posted on the network. Seth listened to his friend's recommendation. The song he wrote became popular in certain circles. For several more years he wrote songs for himself and for a friend.

Soon, the young man moved away from the bench party, he became interested in mastering the guitar. He bought an instrument with the money he saved, learned to play it from video tutorials and a tutorial.

Seth Hawthorne came up with a creative pseudonym and decided to make music at the professional level. His parents fully supported his decision. To begin with, he decided to show the result of his work on social networks. He did it very quickly. Then he created his own channel on YouTube, where he had a vast army of subscribers and admirers. Seth was inspired by his success, he couldn't even expect things on YouTube to go so well for him.

The guy writes songs and music for them on his own. Friends help him shoot videos for songs. So far, they are obtained at an amateur level, but it is felt that the musician makes them from the heart.

At the moment, he is closely cooperating with the SoundCloud music platform. His next creative plans include recording a full-length album, as well as live performances to the general public, not just online broadcasts.

The musician devotes his songs to love, most often unhappy, sad, lyrical. He performs them both with electronic backing, and with his own accompaniment.

In his own words, he immediately feels which song will appeal to his listeners, and which will be just a passing track.

He draws inspiration from life itself, as well as from watching films. Films based on the works of the writer Nicholas Sparks are especially close to him. Seth says that he can watch several films in a row, and then work productively musically.

If you listen to the love songs of this performer, you might think that he is experiencing an unhappy love or betrayal by a girl. However, these are just songs. In real life, everything is fine with him, he has been dating a girl for several years. True, he keeps her name a secret. The young lady can be seen in videos and in joint photographs with the singer.

Thus, if the soul requires lyrics, dreamy sadness or just good love songs, then you should go to the performer's YouTube channel under the pseudonym Powfu and enjoy his work in full.