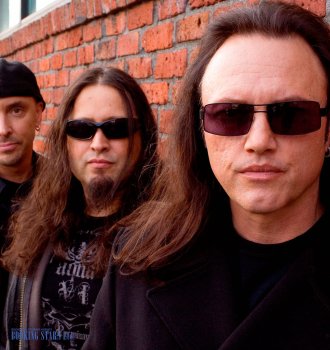 The heavy metal band Queensryche was formed in 1982, in Washington, USA. The current lineup includes Todd La Torre, Michael Wilton, Parker Lundgren, Eddie Jackson, and Scott Rockenfield. The band is particularly famous for such songs as “Queen of the Reich” and “Jet Lucidity”. They hold an MTV Video Music Award for Viewer’s Choice.

In 1982, the band recorded a demo album at Scott Rockenfield’s home. The album contained 4 tracks. The young men showed the album to the record store owners, who agreed to become the group’s managers.

In 1983, Queensryche recorded their debut EP with their own label 206 Records. The main single from the LP “Queen of The Reich” reached the 94th spot on UK Single Chart. It was a big hit in rock and roll communities and resulted in a 7-album deal with EMI Records.

In 1984, the band released their first studio album The Warning. It wasn’t a big hit at first since it didn’t appear similar to the EP. Only two songs “Road To Madness” and “Take Hold of The Flame” were approved by their concert fans.

In 1990, Queensryche released their next album Empire, which was even more successful than the predecessor. The main single from the LP “Silent Lucidity” reached the 9th spot on Billboard Hot 100 and became their most successful song to date.

In 1993, the band released a single “Real World”, which contained the soundtrack to the movie Last Action Hero starring Arnold Schwarzenegger.

In 1994, the band released their next album Promised Land, which reached the 3rd spot on Billboard 200 and was rated platinum by RIAA. After the release of this LP, the band’s popularity began to wane mostly due to their experiments with less popular music styles and several lineup changes. The band released 10 more albums, the latest one to date being Condition Human (2015). Queensryche continues to record new songs and performs live.

How much does it cost to book Queensryche:
Price inquiry
Queensryche booking agent:
Contact agent
Queensryche Contacts:
Send Queensryche a message
« previous next »