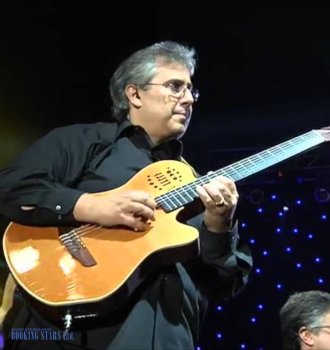 Enrique “Quique” Domenech was born on June 6, 1974, in Puerto Rico. When the boy turned six years old, he learned how to play a musical instrument called cuatro, which is very popular in Latin America. In 1985, Quique was accepted into Puerto Rico Culture Institute, where he was studying music. After finishing his 5-year education program, Quique started playing in Cuatro Orchestra of Francisco López Cruz. In 1993, he participated in recording the soundtrack for the movie La Guagua Aerea about Puerto Ricans, who tried to find a better life in the USA.

In the mid-1990’s, a famous artist Chucho Avellanet invited Quique to record a Christmas album Let's not lose the essence. The LP was released by CDT records and became very popular in Puerto Rico.

The album was presented at the concert in Centro de Bellas Artes Luis A. Ferré. The songs were recorded by such artists as Ada Aponte, Brenda, Elsa y Grisel, Tony Croatto, Jossie Latorre, Irvin García, and Silverio Pérez. Quique worked on the album not just as a composer but also as a music arranger. He collaborated with famous producers and sound engineers to hone his skills.

In the end of 1990’s, Quique recorded his second instrumental album Imágenes. A little later, together with his band Renacer Campesino, he released Pa' Puerto Rico. At the same time, he worked on another Christmas album Feliz Navidad, which he recorded with a band Los Príncipes de la Trova.

While working on the albums, Domenech participated in recording materials for the Puerto Rican TV channel WIPR Television (Channel 6). A little later, the artist took part in recording a famous album Puerto Rico Jazz Jam, which came out in 1999. It was a big jazz music compilation, which included the works of more than 60 artists, including Bobby Valentín, Papo Lucca, and Humberto Ramírez, who was one of the project starters.

In the beginning of 2000’s, Quique worked with the band Haciendo Punto en Otro Son as a music arranger and manager.

In 2000, Domenech signed a contract with Disco Hit and recorded another solo album Evolución. The LP featured modern music arrangement. The artist was becoming more and more popular. It was very tough to book Quique Domenech for any event.

In 2001, the musician released an instrumental Christmas album, which contained a video lesson to help people learn how to play cuatro.

In 2003, Quique started working with a famous musician Tony Croatto and then with his son Alejandro. Together with the father and son, he recorded two albums Con El Corazón (2006) and En Armonia (2007).