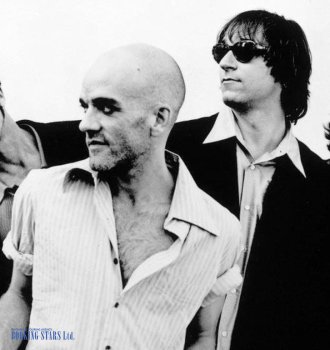 R.E.M is an American alternative rock band. It was established in 1980 and was active until 2011. The original members of the group were Bill Berry, Peter Buck, Mike Mills, and Michael Stipe.

The group released their debut single “Radio Free Europe” in 1981. The song got good reviews and became the group’s first step to immense popularity. They signed a contract with I.R.S. Records and released a mini-album Chronic Town, which also got a good response from the alternative rock fans. The long awaited debut album “Murmur” was released in April 1983. The popularity of the LP exceeded all possible expectations. It was declared the album of the year by the Rolling Stones magazine. R.E.M. became an iconic band not just in the USA, but in Europe as well. It was especially popular among young adults and college students.
In 1984, the band released a new album “Reckoning”, which was completely different from the first LP. It contained two singles “So Central Rain (I’m sorry)” and “Don’t Go Back to Rockville”. Both were a failure, but the popularity of the group was still on the rise.
In 1985, the group recorded a somewhat morbid album, “Fables of the Reconstruction”, which showed the depth of the band’s despair. It got to the top-100 positions in various European charts. The next album “Lifes Rich Pageant” (1986) was somewhat politicized. It was well received by the younger audience. A single from the album “The One I Love” held the ninth position on Billboard charts.

In 1988, the group released “Green”, which wasn’t a big hit but sold a substantial number of copies in the USA. The single from that album “Stand” reached top-10 of the USA charts. Then the band went on a two-year break and recorded a new album “Out of Time”, which gained great popularity both in the USA and beyond. The next album “Automatic for the People” (1992) got to the top of the American and European music charts. Singles like “Man on the Moon” and “Drive” were extremely popular.
The group continued to record new songs until 2011. On September 21, 2011, the band members released an official statement about the end of their work.
Book the band R.E.M right now and get a unique opportunity to here alternative rock legends live!
Book R.E.M