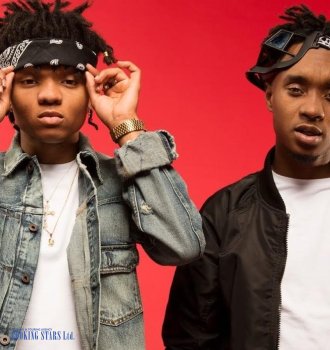 Aaquil Brown and his younger brother Khalif Brown were born in California. The boys started writing music when they were still in school. The family moved from state to state.

In 2009, in Tupelo, Mississippi,  the brothers met Jemiah Middlebrooks. Together they formed a group called Dem Outta St8 Boyz. Their first tracks were uploaded to social networks.

At the beginning of 2010, the band released a single "Party Animal", which brought it local recognition and allowed the members to participate in the music festivals. The band went to audition for the shows "106 & Park" and "Wild Out Wednesday". On December 8, they appeared on Wild Out Wednesday show in New York, performing "Party Animal".

In 2011, Jemiah left the band and the members replaced him with Andre "King Dre" Harris.  In August, the trio appeared on "106 & Park" with their new song "My Diddy". The band came in second. At about the same time, the artists met the producer Pierre "P-Nazty" Slaughter and began to collaborate with him. They spent the next several months at a Georgia studio with P-Nazty and other producers from EarDrummers production team. The band wasn’t making any money and was about to fall apart. It was easy to book Rae Sremmurd (back then still Dem Outta St8 Boyz) for any event.

In 2012, the band released their second project Three Stooges Mixtape. Shortly King Dre left the group. The brothers decided to change the name to Rae Sremmurd, which was a palindrome to the name of the production team (EarDrummers). Besides, the brothers came up with new pseudonyms: "Slim Jxmmi" for Aaquil and "Swae Lee" for Khalif.

The first signs of fame came to Rae Sremmurd when they participated in recording a single "We" together with Mike Will Made It in 2013.

In March 2014, the duo performed at the South by Southwest Music Festival, where they presented their 1st commercial single "No Flex Zone". It became very popular on the web. The music video featured a guest appearance from a popular artist Mike Epps. In September, the single reached the 36th spot on Billboard Hot 100. The band recorded a remix of the song together with Pusha T and Nicki Minaj.

Soon the brothers released their 2nd single "No Type" together with a music video. The song reached the 16th spot on Billboard Hot 100 and entered international charts. Both singles, "No Flex Zone" and "No Type" received platinum certificates from RIAA.

In January 2015, Rae Sremmurd released their first studio LP SremmLife. The album debuted at the 5th spot of Billboard 200 and received good reviews from the critics. The fourth single from the LP "This Could Be Us" made it to the 49th place of Billboard Hot 100. The album eventually became platinum.

In 2016, the band received a BET Award as the “Best Group”. In August, they released the second album SremmLife 2. One of the singles "Black Beatles" conquered Billboard Hot 100 and stayed there for several weeks.

At the end of 2016, the brothers announced pursuing solo careers. However, they didn’t drop their joint project.

In 2017, the duo recorded a new song "Perplexing Pegasus".