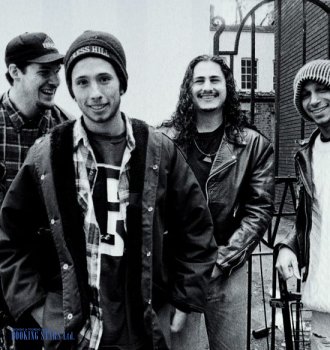 In 1991, after the disbanding of the group Lock Up, one of the members of which was Tom Morello, the drummer Jon Knox suggested that Tim Commerford and Zack de la Rocha perform together. Later, Tom asked Brad Wilk, who auditioned for Lock Up a while earlier, to join them. The name of the band came from one of Zack’s songs, which he wrote before becoming part of the group.

For the first time, the group performed in October 1991 at California State University. Back then, they already had sufficient material to record a studio album. They decided to do it independently. Later the 12 songs became part of a two-sided LP, which was released with the assistance of Epic Records.

The LP Rage Against the Machine appeared in 1992. The LP reached the 45th spot of Billboard 200. In 1993, the group became popular all over the world. The album appeared in the charts of the UK, the Netherlands, France, Germany, Switzerland, Belgium, and many more. The singles "Bombtrack", "Bullet in the Head", "Killing in the Name", and "Freedom" became hits. The album itself earned a variety of platinum certification in many countries. At that time, organizers tried hard to book Rage Against the Machine for private events, but the artists were usually too busy to accept such offers.

In 1996, the quartet released another LP, Evil Empire. Zack de la Rocha performed the majority of the songs from the album. The songs "People of the Sun", "Snakecharmer", "Year of tha Boomerang", and "Bulls on Parade” became international hits. The album topped Billboard 200, UK Rock & Metal Albums Chart and Swedish Albums (Sverigetopplistan) Chart.

In 1998, the artists presented a live album, Live & Rare. The same year, they recorded a non-album single "The Ghost of Tom Joad", which came in 4th on Modern Rock Tracks and settled on the 35th position of Mainstream Rock Tracks.

In 1999, the group recorded its third LP, The Battle of Los Angeles. The album topped Billboard 200, UK Rock & Metal Albums Chart, and Canadian Albums Chart. The single "Guerrilla Radio" became a big hit, reaching the 11th spot of US Mainstream Rock Chart and settling on the 69th place of Billboard Hot 100. Tracks "Sleep Now in the Fire" and "Testify" also became popular. The LP earned two platinum certifications in the USA.

In 2000, the LP presented their last studio LP to date, Renegades. It reached the 14th position of Billboard 200 and US Top Internet Albums Chart. The album went platinum in the USA and Canada.

In 2001, Rage Against The Machine released their second live album, The Battle of Mexico City. It featured 21 songs. Four more were added as bonus tracks.

After 9-11, the group’s songs were marked as “not recommended for the radio”. That led to the group’s break-up. However, Tim Commerford, Tom Morello, and Brad went on to create another successful group, Audioslave. The band recorded three commercially successful albums. However, Audioslave fell apart in 2007 due to disagreements among the members. At the same time, the artists decided to reunite Rage Against the Machine for live performances. The high pay motivated the group.

In 2012, the group created an album of greatest hits, which celebrated their 20 years together.

In 2015, the artists presented a live album, Live at Finsbury Park.

In 2016, Tim Commerford, Tom Morello, Brad Wilk joined DJ Lord, Chuck D, and B-Rea to create another group Prophets of Rage. Fans believe that it’s another step toward reviving Rage Against the Machine.

Book Rage Against the Machine