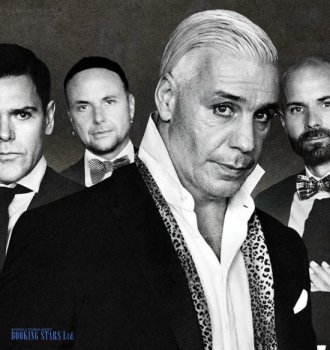 The band Rammstein is famous all over the world. It was officially formed back in 1994. The group members came together in Berlin. However, the story of Rammstein began much earlier.

The guitar player Richard Z. Kruspe wanted to become a rock star since he was 5 years old. The future celebrity was a big fan of KISS. When he grew up, Richard bought a guitar abroad. He was planning to sell it in Germany and earn money. But then Kruspe suddenly changed his mind.

He started playing the guitar trying to impress a girl. Even though Richard has never taken guitar lessons, his improvised melody made a good impression on his friend. She complimented the young man. This helped Richard realize that he wanted to keep trying to become a celebrity. He understood that learning how to play the guitar on his own is hard. So he enrolled at music school. The teachers were impressed with Kruspe’s determination. He could play up to six hours a day.

Soon Richard decided to form a band, inspired by the success of the legendary KISS. He wanted to combine industrial electronic music with hard rock. The guitar player began performing with such little known bands as Orgasm Death Gimmick. He soon met Till Lindemann, who was a drummer at First Arsch.

The young men became friends, and Richard convinced Till to form a new rock group. Later, they were joined by a drummer, Christoph Schneider, and a bass player, Oliver Riedel. That’s how the band Rammstein was formed. They initially performed at local clubs and parties. The keyboardist, Christian "Flake" Lorenz, and the guitar player, Paul Landers, joined the band in about a year after the formation,

The initial lineup of the group has never changed, which is a rare occurrence in the music business. The name Rammstein appeared in a surprising manner. The musicians knew than Ramstein is a city in Germany but thought that it had a double “m”. The name stuck to the group even though the artists wanted to change it. The alternatives were Mutter, Milch, and Erde.

In 1994, Rammstein won a local Berlin contest by performing their songs "Du Riechst So Gut", "Seemann", "Das alte Leid", and "Weißes Fleisch". Later, all of them were recorded in a professional studio.

After the victory and an audition, Rammstein signed a contract with Motor Music. However, it took the artists some time to complete the first album. They were new to the music business and understood that they needed a person to help them. This person was a Swedish producer Jacob Hellner, who later wrote a remix was “Du Hast”.

In 1995, the group presented its debut LP, Herzeleid. It featured 11 songs. Almost all the lyrics were written by Lindemann.

The album went platinum in Germany and the UK. Soon after its release, the artists began working on the next LP. It came out in 1997. Sehnsucht easily reached high spots on the charts in many countries. The next album, Mutter, which came out in 2001, became a huge international hit. Many fans wanted to book Rammstein for private events, but it was hard due to their rising popularity and busy schedule.

In 2004, the artists released Reise, Reise. In 2009, Liebe ist für alle da came out. Both albums earned positive reviews from both critics and fans. They reached high spots on the charts all over the world and earned platinum certifications in several countries.

Besides successful albums, Rammstein was also working on singles and live albums. The group is famous for putting on fire shows during its concerts. Hard rock and fire create an excellent combination, bringing the group more and more fans. One time, Till shocked the audience by breaking the microphone with his forehead. At another concert, the musician set his coat on fire.

In 2015, Lindemann talked about releasing a new album. Two years later, Kruspe said something about recording new songs. However, it took the group four more years to release a new LP.

In 2019, Untitled, finally came out. It topped numerous charts in Europe and came in ninth on Billboard 200. The same year, the band released three successful singles, “Deutschland”, “Radio”, and “Auslander”.

The group holds over 30 prestigious awards, among which are two Grammies and one MTV Europe Music Award.

Rammstein records new hits almost every year and performs live all over the world.