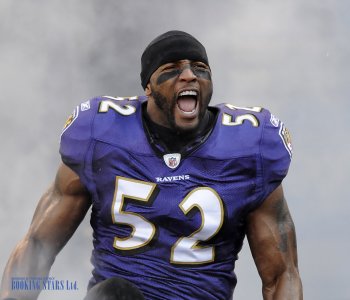 Ray Lewis, in full Ray Anthony Lewis, (born May 15, 1975, Bartow, Florida, U.S.), American professional gridiron football player who is considered to be one of the greatest linebackers in National Football League (NFL) history.

After starring in several sports in high school, Lewis enrolled at the University of Miami, where he became a middle linebacker and was named to the Freshman All-America team. In his junior year—his last at the university—Lewis finished the season with a team-high 160 tackles and earned All-America honours. He was selected by the Baltimore Ravens with the 26th overall selection of the 1996 NFL draft. In 1997 he led the league in tackles and played in his first Pro Bowl.

During the off-season in 2000, Lewis encountered legal difficulties. On January 31 he and several friends attended a post-Super Bowl party at a nightclub in Atlanta, and, as the party was breaking up, a fight erupted outside the club. When it was over, two men had been stabbed to death, and Lewis and two companions were eventually charged with the murders. During a four-week trial in the spring of 2000, the charge against Lewis was dropped (he pleaded guilty to one count of obstruction of justice in exchange for testifying against his codefendants), but his reputation was nevertheless tarnished, and many wondered if his play would be adversely affected. However, the following autumn he led a Baltimore defense that finished the regular season as the highest-ranked in the league and gained a reputation as one of the best players in NFL history. Lewis was named the NFL’s Defensive Player of the Year for his efforts, and the Ravens finished the year by beginning an unexpected postseason run that saw them earn the franchise’s first Super Bowl berth in January 2001. Lewis led his team to a convincing 34–7 victory over the New York Giants, and he was named the game’s Most Valuable Player.

In 2001 Lewis was selected to his fifth consecutive Pro Bowl and was named All-Pro for a third straight year, but a separated shoulder in 2002 limited him to just five games. He returned the next season and won his second Defensive Player of the Year award after again leading the NFL in tackles. After suffering a serious hamstring injury in 2005, Lewis headed his second top-ranked defense in 2006, and in 2009 he was named All-Pro for a seventh time. His play fell off in the following years (although the popular Lewis was still elected to the Pro Bowl in 2010 and 2011), and in 2012 he tore a triceps muscle and played in only six regular-season games. He returned for the postseason and helped Baltimore reach the second Super Bowl in team history. Lewis retired from professional football after the Ravens defeated the San Francisco 49ers to win the championship, and the outspoken Lewis quickly became a television football commentator. He was inducted into the Pro Football Hall of Fame in 2018.