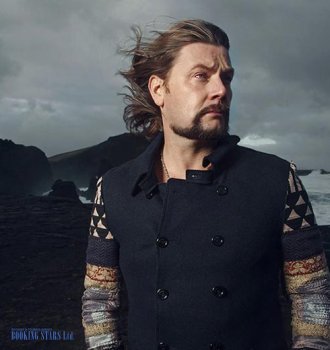 Rea Garvey's full name is Raymond Michael Garvey. He was born in 1973 in Tralee, Ireland. His father was a policeman. His mom was a homemaker, raising seven daughters and Rea. The musician attended high school in his native town. He began the music career as part of the local group Reckless Pedestrians. In 1998, Raymond left Ireland and moved to Germany. All he had was a demo tape and a small amount of cash.

Initially, Garvey had a hard time. He got a job selling t-shirts at music festivals. The aspiring musician posted an ad in the local newspaper, saying that he was looking to form a band for recording and live performance. The ad was noticed by an ex-drummer of Kindtot, Mike Gommeringer, who heard about Reckless Pedestrians. The musicians met and invited three more artists, Uwe Bossert (guitar), Philipp Rauenbusch (bass) and Sebastian Padotzke (keyboard, sax) to form a band.

In November 1998, the group announced its official formation. The musicians called it Reamonn, which was the way Raymond sounded in Irish. At the end of December, the artists gave their first performance at a local club. In 1999, to catch the attention of the labels, Raemonn arranged a performance at a Hamburg club Logo. They were offered several contracts. In June, the group signed one with Virgin Records.

In May 2000, Garvey and Raemonn presented the first LP, Tuesday, which came in 5th on the German Albums Chart. In 2011, they recorded a new album, Dream No. 7. It climbed to the 6th spot of the official chart. In May 2003, Raemonn’s third LP, Beautiful Sky, came in third on German Albums Chart. To promote the album, the group toured Europe with a famous singer Robbie Williams.

In September 2004, Raemonn presented its first live album, Raise Your Hands, which came in 7th on the German chart. In April 2006, they recorded another successful LP, Wish. The same year Rae Gravy collaborated with the German group In Extremo to record a single “Liam”, which appeared in their album, Mein Rasend Herz. Soon he started working on the German version of Nelly Furtado’s “All Good Things (Come To An End)”.

In 2007, Raymond was performing with the group while working with other artists. He collaborated with Paul Van Dyk to record “Anna & Ludo”, which was part of the soundtrack for the movie Keinohrhasen.

In November 2008, Raemonn released its next LP, Reamonn, which was commercially successful. It reached the second spot of the Germany Albums Chart. The same year, the group toured the world with a British rock group Status Quo.

In September 2011, Rae presented his first LP, Can't Stand the Silence, which reached the 4th spot of the official German chart. In November, he was invited as a judge to the talent show Die Stimme Deutschlands. Next year, he also worked on the show, and his protégé Nick Howard won the top prize.

In 2013, the artist worked on his second LP, which came out in May. Pride reached the 6th spot of German Albums Chart. Between October and December 2014, Garvey worked on Die Stimme Deutschlands with a new protégé Lina Arndt, who reached the second place on the show. At that time, many organizers wanted to book Rae Garvey for public and private events.

In November 2015, Garvey presented his third LP, Prisma, which earned excellent reviews from the critics and reached the second spot on the chart. In October, Rae worked on Die Stimme Deutschlands once again.

In March 2018, the artist presented the fourth LP, Neon. The album climbed to the second spot of German Albums Chart and reached the 7th place on Austrian and Swiss charts.